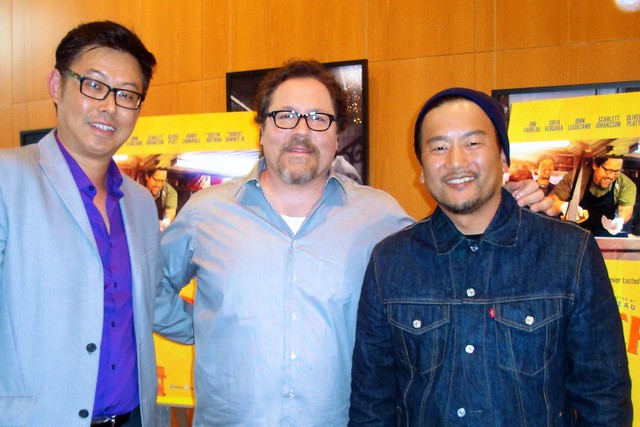 In life, if you stick around long enough, you'll get to see the most unlikely things happen. And in L.A.’s food scene, you'll see it occur more often than in other places. For example, you'll witness a celebrated, local food writer win the first and only (to date) Pulitzer Prize for food criticism. You'll see the rise and rise of a fine dining French chef turn the restaurant world on its ear by creating pop-up dinners, with feverish anticipation from fans rivaling that of rock concerts, while breaking the back of an online restaurant reservation system. You'll watch familiar L.A. chefs become familiar faces on television on a predictable basis, across all networks. Then, of course, you'll experience a humble, beat-up, borrowed taco truck spawn a food revolution and go on a journey that only the wildest dreamers could envision. 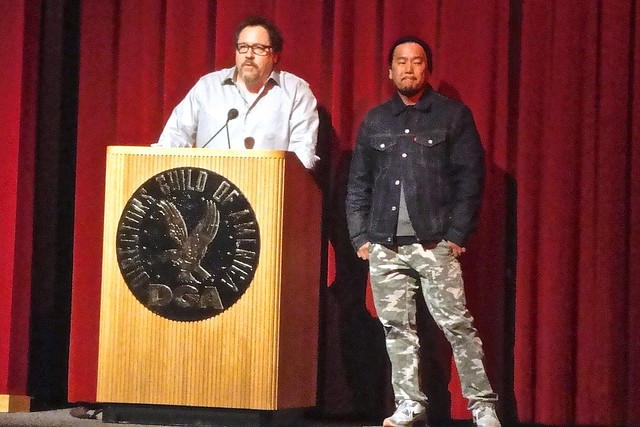 Last week, while attending a screening of the film Chef directed by and starring Jon Favreau, at a theater located inside the Director’s Guild of America, I never felt so proud to be a food blogger from Los Angeles. Sure, the movie Chef was not perfect. (What movie, besides Blade Runner, is?) Laughably, there were outlandish versions of reality like AOL forking over (in Dr. Evil voice with pinky in mouth) $10 million for a food blog (not mine, that’s fer sure), and sending a tweet to invite L.A.’s top restaurant critic to come in to try a new menu at a moment’s notice and he actually showing up! Ridic.

But, I saw this movie beyond its plot. I decoded this film via the lens of my decade-long life as an L.A. food blogger and could see the characters behind the characters, the events that affected plot development, the real stories that flowed in the veins of the screen version.

No, this won’t be a film review—as much as I enjoyed the movie and, overall, felt it captured the local food world in the past few years quite nicely. Instead, I’m choosing to notice those aspects in L.A. food/restaurant life that has now become validated on the big screen and therefore become part of the fabric of the country and, to some extent, the world. 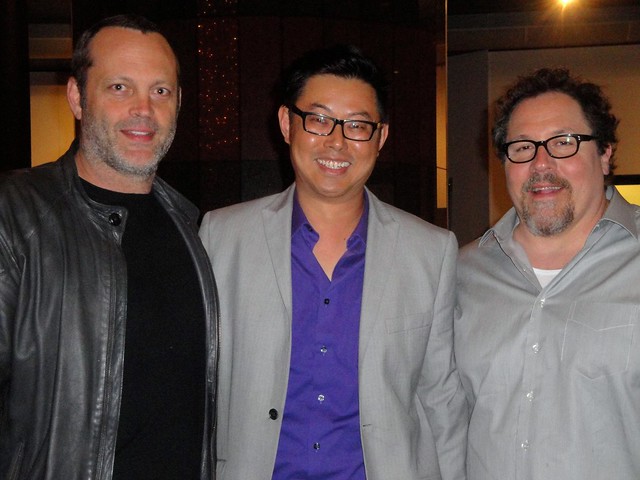 When I started food blogging in 2004, L.A. wasn’t the world renown food city that it is today, far from it. Only last October, Ruth Reichl declared that “L.A. is the most important place to eat in America right now.” So, the City of Angels has seriously come a long way.

In the movie Chef, farm-to-table was gloriously represented with Carl Casper's (Favreau), the main character, visit to the Santa Monica Farmers Market. This is hands down the best farmers market in the country, and it deserved the featured spot it got in the picture. Now, if Laura Avery, the S.M. Farmers Market supervisor, made a cameo that would've been a pretty cool inside baseball appearance.

The Heavy: My theory is that the antagonist food blogger/restaurant critic Ramsey Michel (Oliver Platt) is, at least in part, based on Jonathan Gold. The giveaway for me was his glaring usage of a Jonathan Gold signature word cloying. Of course, Gold isn't the adversarial type in real life as was with the critic character in the film, but Gold did get a special thanks in the end credits. I wonder for what? Perhaps as a Twitter feud consultant.

Anyone who was around for the dawn of L.A.'s food truck revolution, or who has followed it, knows that the Kogi truck was the inspiration for this film. Roy Choi (co-founder of Kogi) is even a producer of Chef. There are subtle and obvious nods to Kogi's real life events and players in the movie.

For example, the boy in the film, Percy, played by Emjay Anthony, he's the social media wiz kid who helps his dad let everyone know where their El Jefe Cuban sandwich truck will be landing resulting in massive crowds where ever they go. Well, in the real world, this kid was actually Alice Shin of Kogi, who is the social media soul of Kogi running its Twitter, blog, Facebook, and anything else she can apply her unique voice, lending a solid personality to Kogi—always signing off with "Aliiiiiice."

As far as the actual truck is concerned, in the movie, a sleazy business man and Capser's ex-wife's ex-husband, amusingly embodied by Robert Downey Jr., hooks up Carl with a beat-up, grimy, old food truck complete with decomposing vermin. Carl, Percy, and his buddy Martin (John Leguizamo) do a total make-over on the rolling disaster, transforming it into a shiny, sparkling modern food truck with the de rigueur flashy logo emblazoned on all sides. This is similar to how Roy Choi and Mark Manguera (Kogi's other co-founder) acquired their initial truck. But the guy who was the liaison for this arrangement was none other than Jaleel White, most famous for his Steve Urkel character on the Family Matters sitcom. 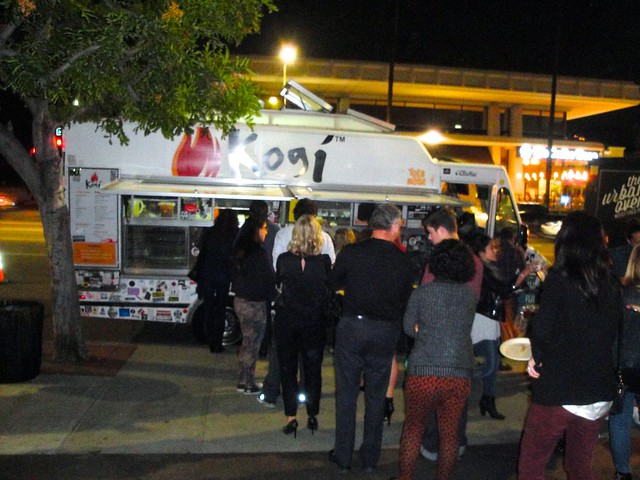 Goosebumps peppered my arms when one of the big scenes of Abbot Kinney's First Friday filled the screen. A breathtaking crane shot down Abbot Kinney, revealed an all-star cast of L.A. food trucks from Baby's Badass Burgers to Grilled Cheese Truck, with, needless to say, the OG Kogi BBQ truck taking center stage. In my personal Chef movie headspace, this moment in the film was a victorious culmination of the wild west, rebellious, risk-taking, Los Angeles, band-of-brothers-and-sisters spirit that flowed so thick you could pour it on french fries. This scene—no matter how sentimental or precisely because it was sentimental—made me love my town and what I do like never before.

In the film, Favreau's character emphasizes the importance and power of food bloggers in L.A. I felt this part was glamorized out of proportion, but I do understand that many high profile food bloggers, myself included, do wield a certain amount of influence that may affect a business for good or ill. Ironically, Roy Choi and Mark Manguera regularly credit me with helping Kogi become what it is today, though I feel they give me too much credit. (Yes, that was what the kids today call a humble brag.) 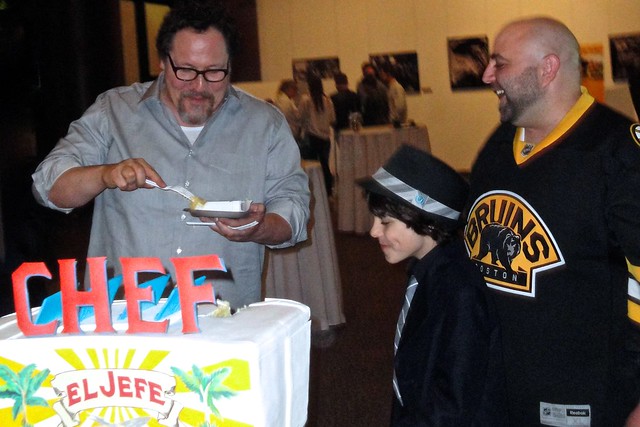 Favreau, co-star Emjay Anthony, and Duff Goldman of Charm City Cakes having their cake and eating it too.

Hearing Favreau’s character give L.A. food bloggers a Hollywood shout out really meant a lot. From the handful of us in the primordial beginning to the massive, social media-driven family we have now become, boorishly hashtagging at the dinner table, this is the new reality. We are in the club, legitimized, and not just some curiosity like years before when old media wasn’t sure what to make of us so they patted us on the head and threw us a few bones.

The new reality is the director of Iron Man made a movie about us, all of us who love food in L.A.—the ones who make it, eat it, take pictures of it, promote it, write about it, live it, and risk it all.

However, Chef is also a road trip movie, but what the viewer should understand is that the "road" and the "trip" is really our collective journey in Los Angeles as passionate food lovers. It's about where we're from, where we are, and where we're headed. And, it’s not over. More tasty excitement is coming our way. There may or may not be a sequel to Chef, but there absolutely will be second helpings for us all. To borrow a quote from Steve Jobs’ famous commencement speech at Stanford in 2005, “Stay hungry, stay foolish.” Because that's when delicious things happen.

Now, if you’ll excuse me, I think I’ll have another galbi taco.