Willy Wonka & the Chicken Factory. Introducing ChocoChicken. Could This Be the Next Food Frenzy? 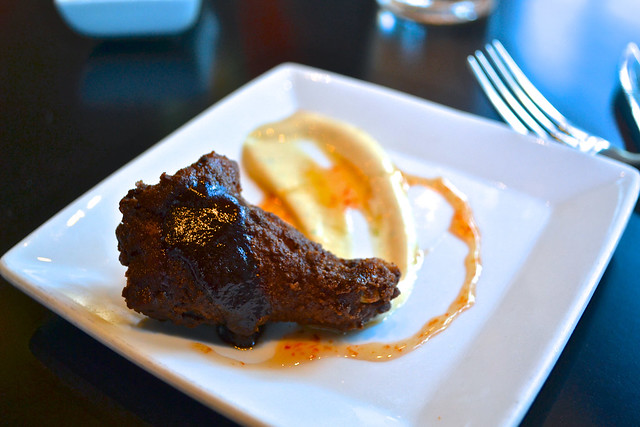 According to Sean Robins, a Hollywood producer and guy who ate at every restaurant in the Los Angeles Zagat guide, the inspiration for chocolate fried chicken came to him when he pondered chicken mole. Really, it was deciding between eating chicken mole or fried chicken. Then, like many an idea is hatched, he mixed the two in his head, and thus ChocoChicken was conceived. (Which makes sense since "mole" is derived from the Nahuatl word for mix.)

Robins immediately contacted his food expert buddy Keith Previte. A ChocoChicken prototype was concocted, then brought to Adam Fleischman (Umami Burger, 800 Degrees) and Lee Weinberg of AdVantage Restaurant Partners. Fleischman helped tweak the recipe until the results were to their liking, however the tweaking continues at these early stages, according to Fleischman. 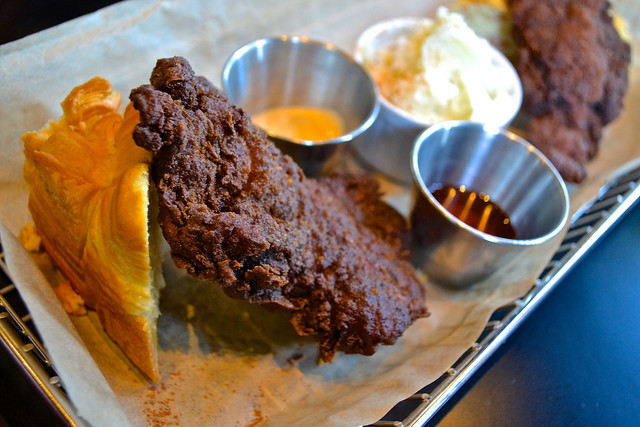 ChocoChicken is certainly not a fried chicken that is slapped together. The raw ingredient chicken itself is a premium Jidori that is free range and organic, also never frozen. The freshly dispatched fowl is locally sourced near Downtown Los Angeles.

Upon receiving the chicken, a 36 hour brine in secret ChocoChicken ingredients takes place. The meat is then coated with a cocoa batter that includes spicy and savory seasonings. The boneless breast and thigh go on the ChocoChicken platter. The ChocoChicken drum-ets are bone-in.

ChocoChicken has been pre-hyped since January for a multi-month build-up of anticipation. It's finally here. As an ambassador and embracer of the odd edible, I was immediately attracted to the idea of ChocoChicken. But as the months passed, a bit of skepticism and food mash-up weariness developed. However, I still hoped for the best while maintaining some reservation. 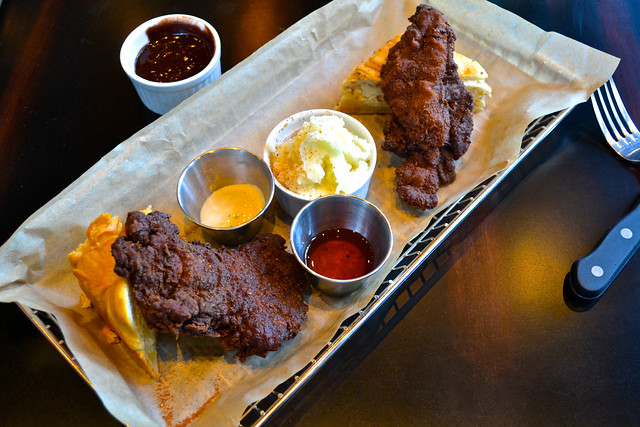 Chicken and chocolate, everything old is new again.

Well, I've tasted ChocoChicken and am truly happy to report that Willy Wonka and Colonel Sanders themselves would be proud and quite envious of the result. The all-critical crust was satisfyingly crispy yet sturdy, staying intact with each bite. The texture of the deep mocha-brown crust was as pleasurable as fried chicken crust can get. Flavor-wise, a tricky balancing act of cocoa-sweet, spicy, and savory converged to create a sapor symphony that was both fun and logical with a suggestion of maple syrup. Not one flavor component overwhelmed or took center stage, they all delicately harmonized in a way I had hoped. (Read: not too sweet!) The taste precisely met how I imagined ChocoChicken would be like.

But the element that really shattered my expectations was the moistness of the chicken. Biting into the breast, I saw liquid eek out of the white flesh like tears—this is chicken so juicy, it'll make you cry or slap yo' mama and make her cry. Fried chicken in L.A. has been a sad state of affairs for too long (with the exception of a few places like Plan Check), ChocoChicken possesses that out-of-the-chicken-box creativity, quality, and craziness that can propel it to food superstardom much like the Cronut and even staying power of classic fish n' chips. 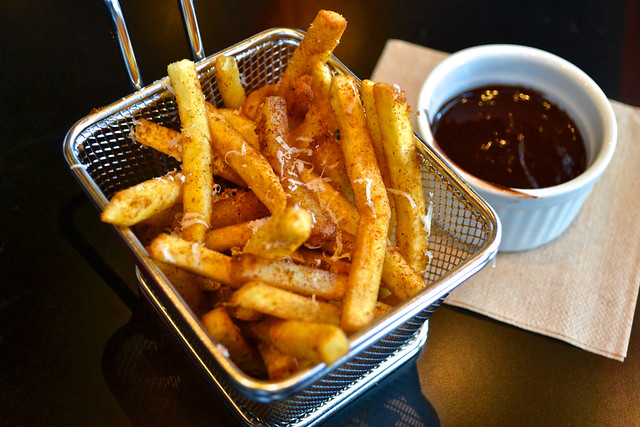 The sauce options available for ChocoChicken were as interesting as the chicken: ChocoKetchup, Bee Sting, and Miso Ranch. I much preferred the ChocoKetchup which initially greets the tongue as chocolate syrup then immediately follows with a ketchup finish. This sauce was ideal with the chicken and also great with the duck fat fries. The other well-paired sauce was the Bee Sting, essentially a habanero pepper-infused honey by Gindo's Spice of Life artisanal hot sauce—definitely sweet as honey but stung like a bee. 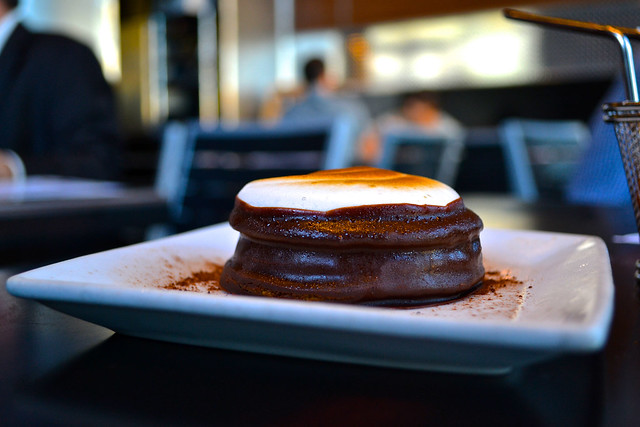 Other items like the white chocolate mashed potatoes and Electric Chocolate S'mores, a version of whoopie pie, were intriguing but didn't quite pay off like the chicken. Also, I enjoyed the cup of raw veggie sticks that included watermelon radish, jicama, celery, and others—really good dipped in the miso ranch.

There's a full bar too. The featured cocktail I had was very summery and refreshing. Of course, PBR is also an option.

ChocoChicken is located in Downtown L.A. but will be seeing quick expansion soon enough with a Santa Monica location coming.

I've been around long enough to see many food trends come and go. I'm not a betting man, but I'd make an exception for ChocoChicken. The ChocoChicken partners aggressively strove for that elusive "crack factor." Assuming that crack cocaine is not actually one of the ingredients, I think they achieved it. I, for one, am now a ChocoChicken junkie. 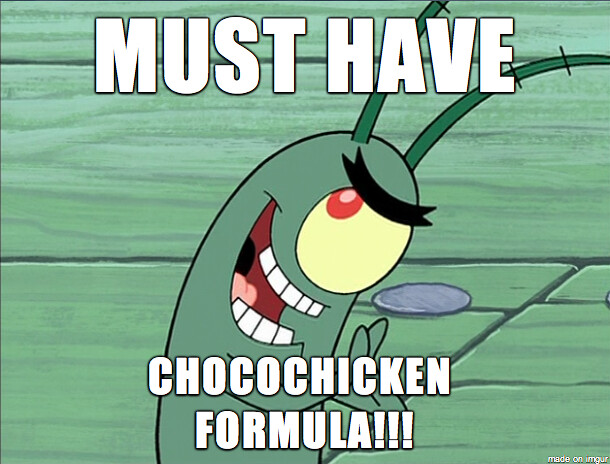