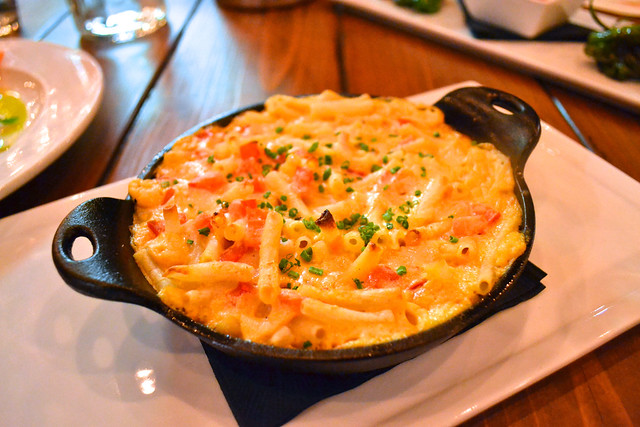 Some of you reading this may be thinking, "What's so strange about vegan food?" Well, nothing, but the cuisine still is relatively uncommon worldwide, and that's one of the culinary beats I cover.

With that established, I live in Southern California, and vegetarian, vegan, and raw vegan cuisines are very common and accessible here. Two of my favorite places run the gamut: Matthew Kenney's M.A.K.E. and Veggie Grill. M.A.K.E. is a refined and sophisticated approach to raw vegan food. Veggie Grill is in the fast-caual, vegan category and hooks me every time with its Chickin' items.

Then, recently, I learned of Sun Cafe Organic Cuisine. This place is very popular with vegans and non-vegans alike. Just steps away from Universal City, home of Universal Studios, Sun Cafe is a star in this category.

The restaurant space itself feels like somebody's cozy home. There are distinct rooms and nooks where tables are intimately placed. The lighting at night is warm and inviting. The service is quite attentive. All this is great, but I'm telling you, stay for the Mac & Cheese! I'm not even a big, mac & cheese fan, but this stuff is tasty. The mac part is made of quinoa pasta and has a great al dente bite. The cheese part is a satisfying cashew "cheese" sauce which lends just enough goo and chew. A bourbon smoked paprika adds that certain dimension and depth you can't quite pin down. 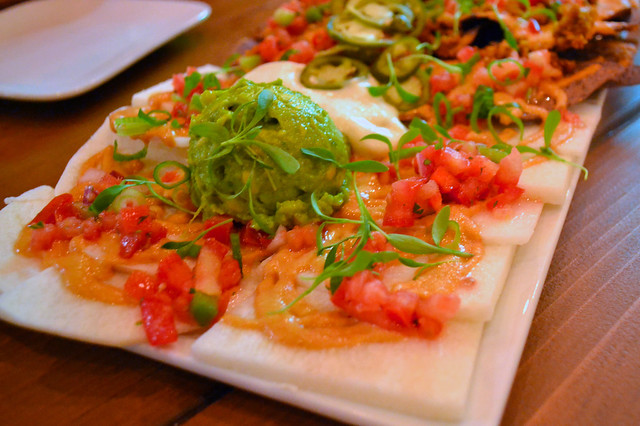 The Sun Nachos are popular here and come in vegan and raw vegan presentations. I sampled both. While the vegan baked blue corn chips were passable, the raw thinly sliced jicama version was the winner. It was simply more refreshing, unique, and satisfying. 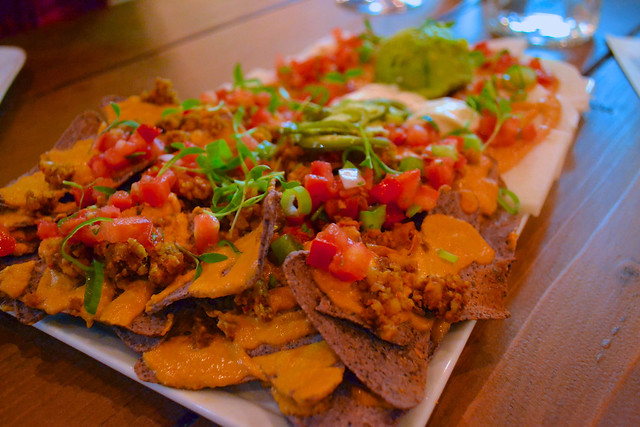 The "nacho cheese" on the platters are pretty much the same as one that goes into the Mac & Cheese—a cashew cheese sauce. Many of Sun Cafe's "cheeses" and sauces are made of cashews, just a heads up if you have a cashew allergy. 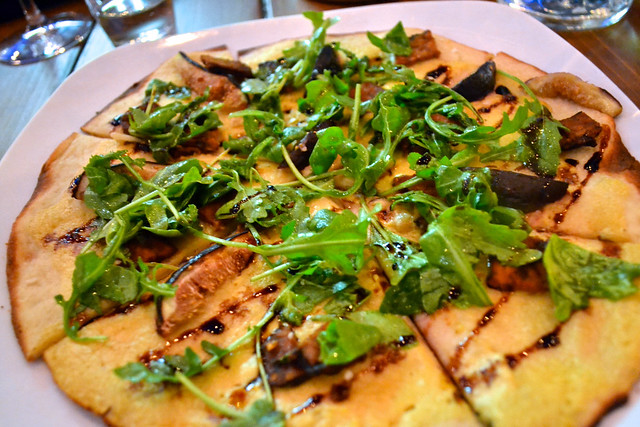 A really enjoyable pizza offered at this vegan eatery is the Farmer's Market Pizza. Only a few strong ingredients maximize the flavors in this vegan pie. Fresh figs, tempeh bacon, arugula, Meyer lemon vin, and a balsamic reduction make this pizza pop with bright freshness with a savoriness from the tempeh bacon and white sauce. The white sauce is a smooth blending of cashews, garlic, shallots, and nutritional yeast. All sit atop a brown and white rice (with a bit of tapioca) crust that is texturally pleasing. 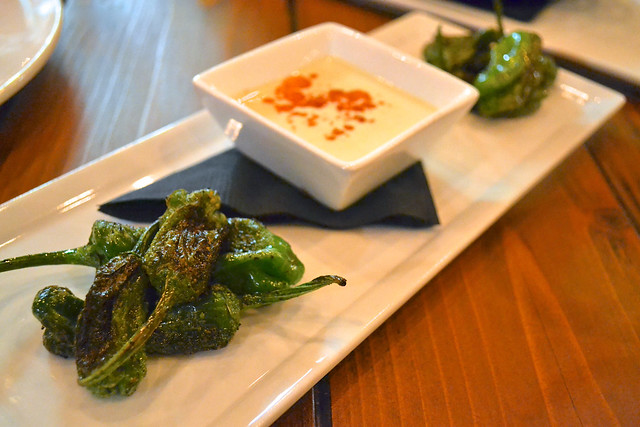 These peppers are the shishito!

My favorite amuse of the night was a simply grilled and blistered plate of shishito peppers, my current pepper of choice. 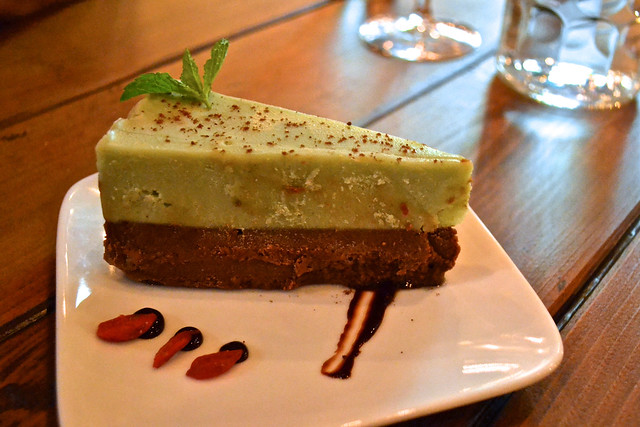 Although I am not a dessert guy, Sun Cafe's extremely popular Chocolate Mint Chip Pie was ridiculously good—crack factor good. Customers place to-go orders on their cell phones and do a drive-by pick up just for this beauty. I couldn't put my fork down. It's very dense and creamy with soothing mint and on point chocolate flavors. If you enjoy those little Andes Chocolate Mint candies, you'll go gaga for this pie.

It's also worth noting that our chef of the night, Roi Elam, put in some time at Matthew Kenney's M.A.K.E., so his chops in high concept, raw vegan cuisine is very respectable. However, it's his comfort food that shines. Maybe that's why this restaurant has sun in its name.