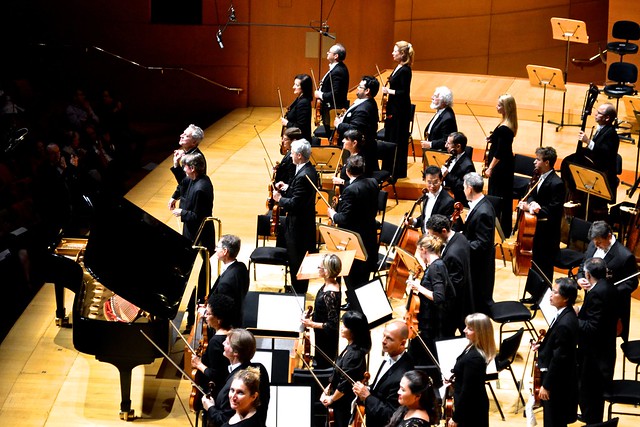 I'm still aglow from the magical evening of feasting and night music. It's funny how a pre-concert dinner and some classical music can transform even the most dull and unrefined (me) into a sparkling sophisticate. If you didn't know, I'm referring to the L.A. Philharmonic's dinner and concert packages which pair a restaurant pre-fixed menu with a classical concert at the Walt Disney Concert Hall. For example, on October 24, there was the option of enjoying Spear Steak & Seafood with Salonen, Saariaho, and Sebelius. (You could've picked Chaya too but lost the alliteration though still have enjoyed awesome food.) 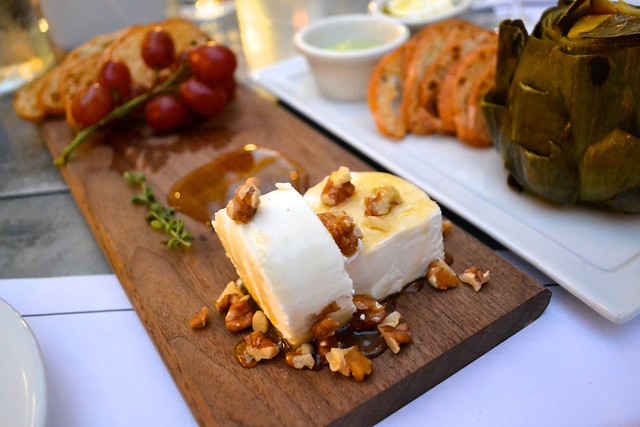 On the eve of Halloween, my pre-show restaurant choices were between Zinc Cafe & Market or Eat. Drink. Americano. I opted for Zinc for the romantic patio. After all, it was date night. A Chardonnay and Sauvignon blanc were quickly ordered and just as quickly brought to the table. Ah, the night was afoot. The Honey Drizzled Goat Cheese with walnuts went with the wine just fine. Sweet and pungent, opposites do attract. 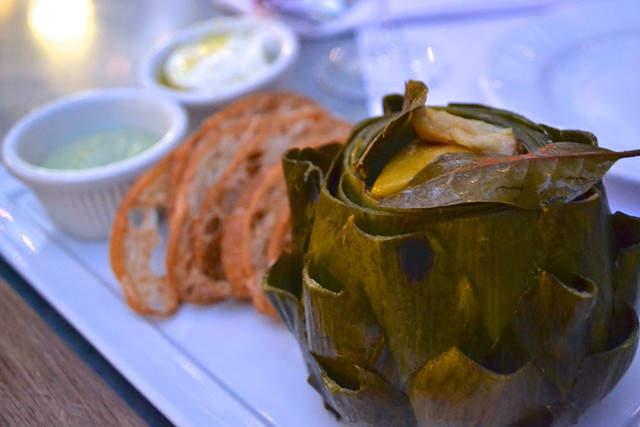 The artichoke did not choke.

The artichoke was warm and became almost perfect when dipped into the basil aioli. The happy train continued to choo-choo-chew. 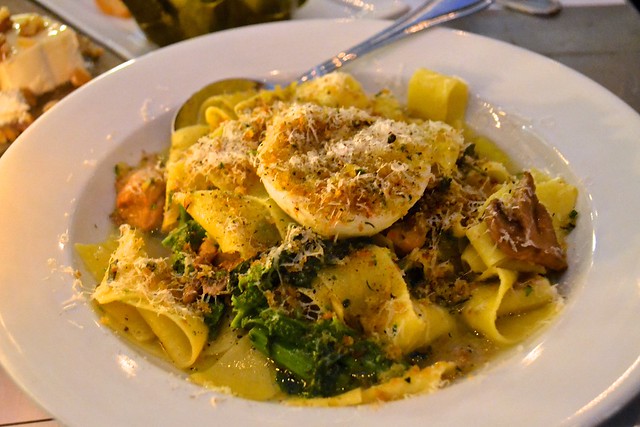 My favorite pasta is pappardelle.

I wasn't sure about this one called Pappardelle with Bitter Greens. But, you know, sometimes bitter makes it better, in this case, for sure. Blanched bitter greens with assorted mushrooms, fresh black pepper, bread crumbs, lemon zest, all crowned with a poached egg made this pappardelle plate super satisfying. Mainly buttery, bittery, and earthy from the different mushrooms, the combo of flavors and textures were harmonious in unexpected ways. 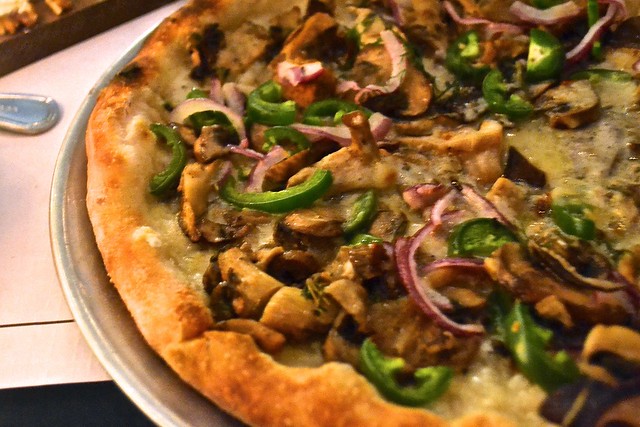 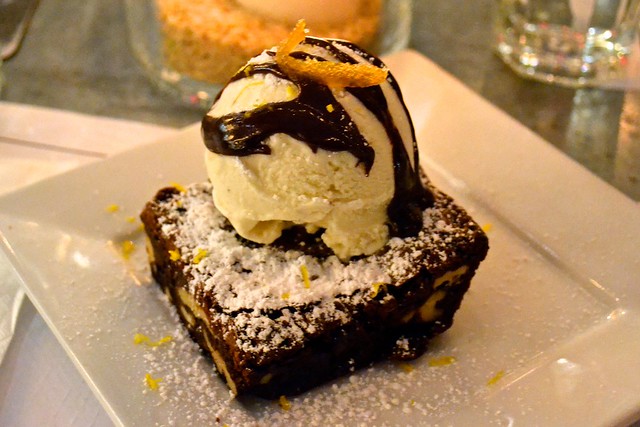 I cashed in my brownie points for the Warm Brownie dessert topped with vanilla ice cream. The intermingling of warm and soft with cold and creamy was classic and perfect. This dessert vanished in seconds, just in time for a second dessert. 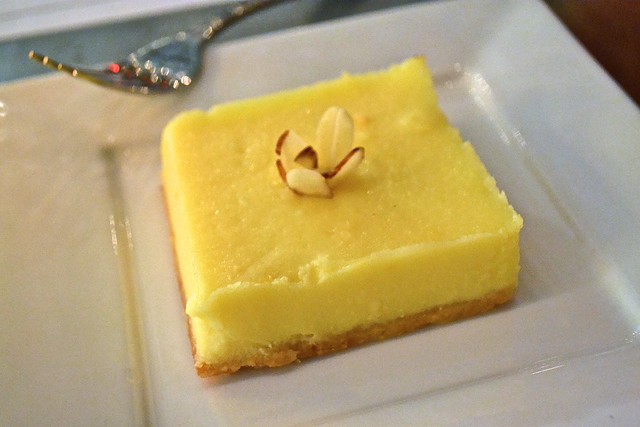 Don't be a square. Eat one instead.

The Lemon Square was a nice way to end the meal since its tartness sort of acted as a palate cleanser. And, with a final swig of Chardonnay, it was off to the concert. After all, Esa-Pekka was patiently waiting, wand in hand. 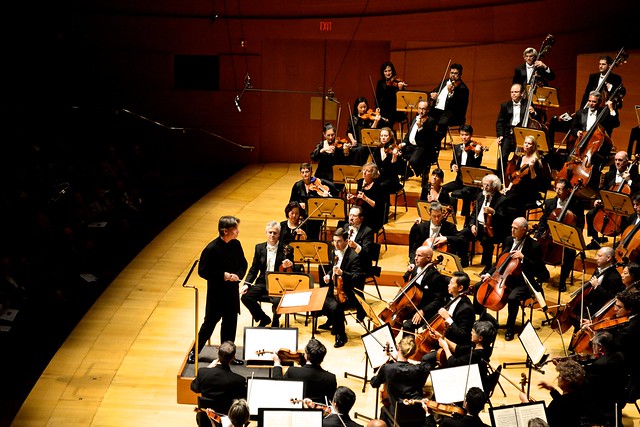 He's back from London! Our former L.A. Phil frontman Esa-Pekka Salonen has returned to gig his fall residency at Walt Disney Concert Hall. Mozart's Piano Concerto No. 20 in D minor, K. 466 (I have no idea what this means) filled the hall during the first half and was exhilarating, particularly the piano by Jeremy Denk.

Post-intermission brought us Beethoven's Symphony No. 3 in E-flat major, Op. 55 ("Eroica"). The music was a splendid end to a joyous night of food and fine culture.

There are several more "Get Your Phil" dinner and concert packages to experience. The next one on November 14th features music by Ravel and Elgar. However, being a foodster, I'm mostly excited about the restaurant selections of either John Sedlar's Rivera or one of Esquire Magazine's Best New Restaurants 2014 Faith & Flower. That should be a great show package. Check out the other upcoming dinner and concert packages at L.A. Phil's website.