The Mystery of GQ Restaurant Critic Alan Richman's #25 Pick for "Most Outstanding Restaurants in U.S." or WTF is Alan Richman Smoking? 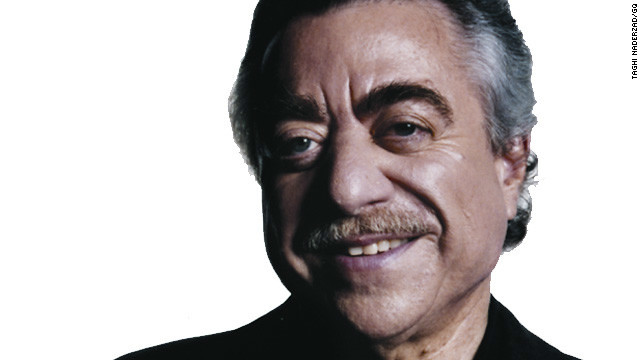 Maybe I’ve been living in L.A. too long. Maybe I’ve indulged in dim sum for too many years. (I’ve eaten dim sum since I moved to Los Angeles when I was 3 years-old—virtually each weekend when I was a child with cha siu baos practically doubling as pacifiers.) Maybe I've started taking things for granted. Maybe Alan Richman knows something I don’t.

My question: What the har gow is Alan Richman, GQ’s long time food critic, raving about? Awarding as one of his picks Shi Hai Restaurant in Alhambra for “GQ’s 25 Most Outstanding Restaurants of 2015”? Did any of my Los Angeles readers take notice? You should’ve because it stuck out like a sore chicken’s foot in a dim sum tin.

Mind you, this is Richman's list of “Most Outstanding Restaurants” for the entire nation—48 contiguous states plus Alaska and Hawaii—that’s a whole lotta eating places. How Shi Hai managed to score a sweet spot at #25 is mouth-boggling.

For anyone who’s not up to speed on Shi Hai Restaurant, here’s the gist: Shi Hai is a Chinese seafood and dim sum restaurant in Alhambra, CA, specializing in “modern style” dim sum—which usually means the diminutive, “touch your heart” bites of Chinese deliciousness like har gow (shrimp dumplings) are made to order and not rolled across a banquet room on steam carts waiting to be snatched up by diners as is with traditional dim sum service.

Also, modern style dim sum is usually of higher quality in both ingredients as well as technique.

During my visit to Shi Hai, I was impressed with the selections pictured on the menu, but, as many Yelpers noted, the items didn’t represent very well IRL, kinda like a bad internet date. 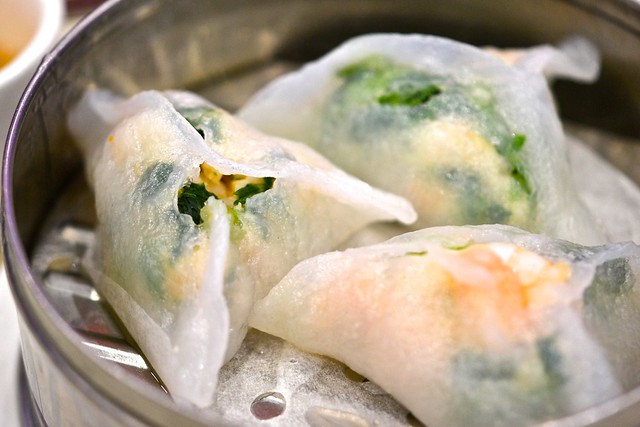 Superior dim sum, especially at the level of a high end Chinese restaurant, should reveal expert craftsmanship cultivated from decades of time in the kitchen making dumplings, rolls, and buns. This is evident in the precision of the folds, the amount of pleats, and the pleasing mix of ingredients that distend the dumpling. 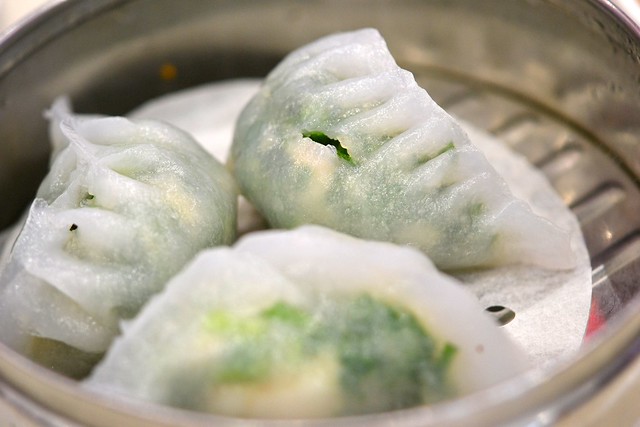 At Shi Hai, an order of Shrimp & Bean Sprout Leaves dumplings arrived splitting at the seams or torn. Another tin of Shrimp & Chives dumplings had similar imperfections. This shoddiness I would expect to see at a Chinese deli that heavily discounts its goods, not at one of the top 25 restaurants in the country. 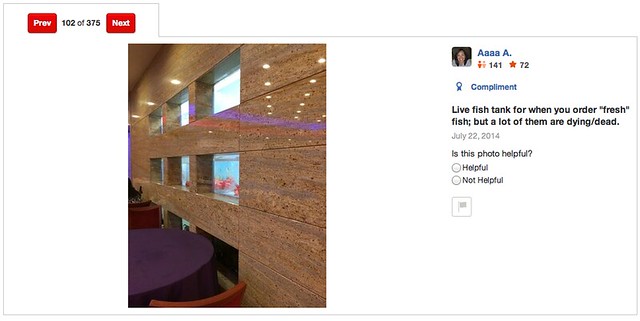 Take some stars away for this one.

Furthermore, a Yelper noted in a photo comment that many of the “fresh” fish are “dying/dead.” I verified this with my own snapshot. In fact, our table faced the “live” fish tanks, and the first thing I noticed in the hideously murky water were several thornyheads sleeping with the fishes, um, themselves. 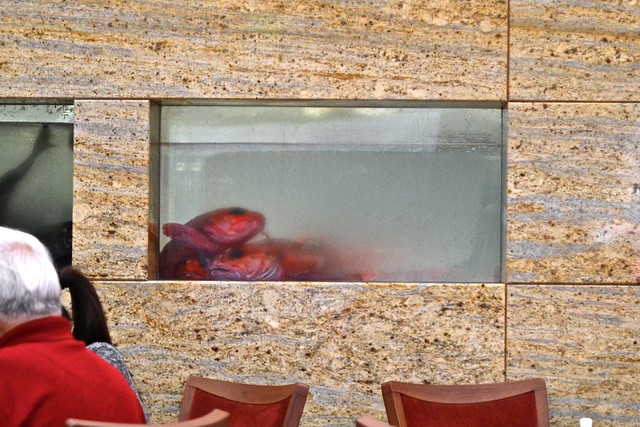 I’m completely baffled by how a high-profile restaurant critic like Richman included a mediocre place like Shi Hai on his exclusive list. Here’s how he justifies his choice in his piece:

Okay, I have no inkling how the guy decides which restaurants are deemed “outstanding” but “just fantastic small steps” is poor reasoning. (What is this? MasterChef Junior?) In fact, it’s the “Great Leap Forward” that should justify inclusion on the list rather than not. That said, Shi Hai isn’t even making “fantastic small steps.”

Food, of course, isn’t the only measure of an exceptional restaurant, and, clearly, Richman feels Shi Hai’s attentiveness to its guests was noteworthy. I couldn’t disagree more. There are too many examples to share, most involve me thinking that our table had the power of invisibility as I tried to flag down server after server, all ignoring me, managers included. 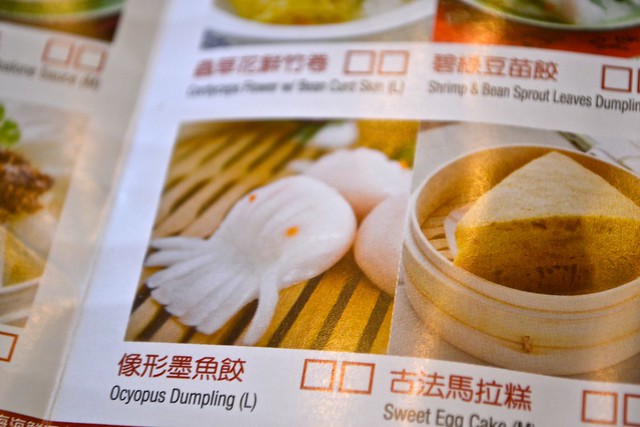 However, the worst offense was when I was given the wrong dim sum item. I had ordered the octopus (ocyopus on menu - haha) dumpling but was delivered har gow (shrimp dumpling) instead. They do not look the same. In fact, with its attempt at being artsy, the restaurant tries to make the octopus dumpling look like an octopus. The shrimp dumpling looks like a standard dim sum shrimp dumpling (but with these creepy eye marks). 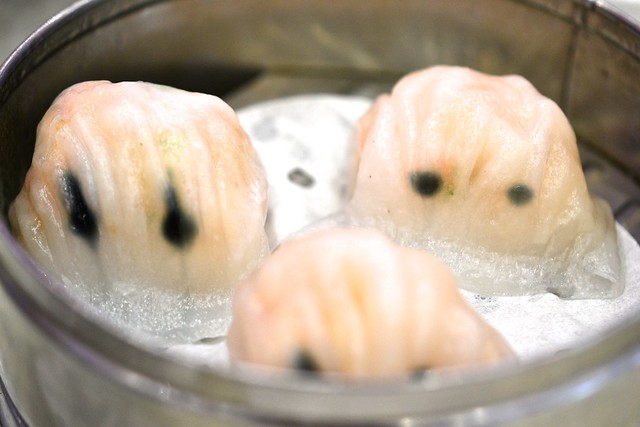 When I brought this to the server’s attention (after multiple attempts at waving over one), she told me that this is what I had ordered. I politely disagreed and explained IN CHINESE that I ordered the octopus dumpling not the har gow. She passed me off to an assistant manager who also told me that I had ordered the har gow and that is what I got. Fortunately, I still had my order form to prove that I checked off the octopus dumpling. Bewildered, she went off to get the top dog manager who came over and explained that the kitchen was out of the octopus dumplings and substituted with the har gow. I asked him why nobody told me. It’s no big deal. Just let me know. Don’t make me sound like a moron. He eventually removed the har gow from the bill. If I didn’t speak Chinese, I doubt there would’ve been a resolution.

These are not the signs of an exemplary dining establishment worthy of inclusion on any “outstanding” list. So, why is Shi Hai on Alan Richman’s list? I have no clue. Maybe Alan can explain himself better.

In an apples to apples comparison, I personally would’ve given the #25 spot to China Red which is also a modern style dim sum restaurant and opened in 2014, on par with the King Huas and Lunasias of L.A.

Like I said, I have no idea what Richman is thinking. There’s no good dim sum where he’s from, so maybe he himself has little idea of what the good stuff is, but I think there’s more to it.

If Richman wants, I can show him where to eat next time he’s in L.A., but until that happens, I wish he’d stop telling me where to go, especially for dim sum.
Email Post
Labels: Alan Richman chinese dim sum food GQ San Gabriel Valley Shi Hai

Unknown said…
Yo! If you happened to read my review of dim sum at Shi Hai in the San Gabriel Valley Papers, you'd have noticed I had the very odd experience of getting...nothing. Sat there and got...nothing. First waiter I asked about the missing order (he who had taken the order) ran away and never reappeared. Next waiter was good enough to check -- and told me I was sitting at the wrong table. Since I was sitting at the table I'd been sitting at since I entered, I figured he was having a little fun with the round eye. Turns out the first waiter had put down the wrong table number -- and all our food had gone somewhere else. And they didn't complain.
WTF? But the restaurant made up for their error -- by bringing my order at glacial speed. More WTF? There are better options...
cheers,
merrill shindler
los angeles newspaper group