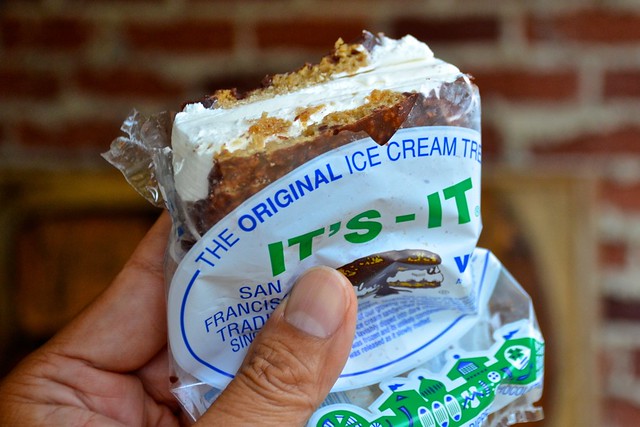 IT'S-IT is an ice-cream sandwich and time travel machine in one.

Food memories are very powerful. A waft of smoky grease from the corner Chinese restaurant immediately transports me to the first plate of fried noodles I’ve ever eaten, decades ago when I lived in Chinatown. The aroma of fresh bakery goods has similar effect for others. It’s more than a Pavlovian trigger for drool production; it replays past visions of good times and good food. 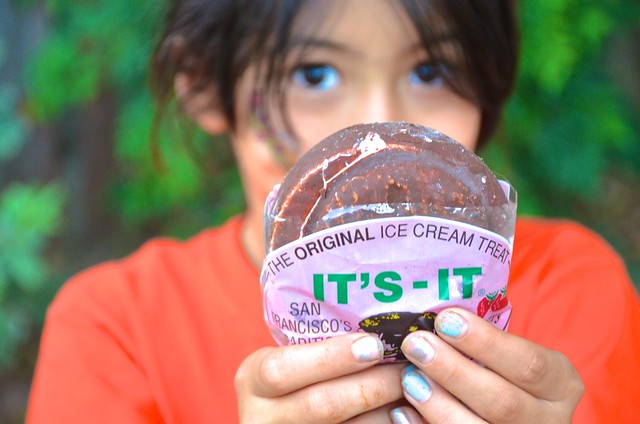 The ice cream sandwich with the peculiar name IT’S-IT inspires memories from my childhood that’s only rivaled by certain old movies and Disneyland. According to official IT’S-IT lore, the ice cream sandwich got its name by people who tried it and then “declared by all to be ‘IT!’”—nice story, but a little contrived. Nonetheless, I LOVE the wacky name and the delicious product—luscious ice cream in between crunchy oatmeal-raisin cookies coated with dark chocolate. It’s just a great ice cream sandwich. 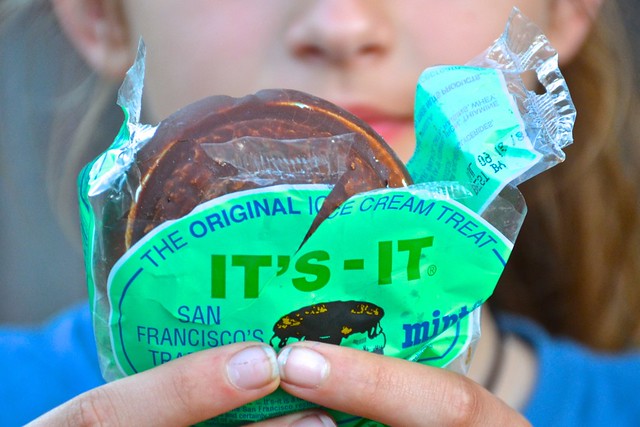 Reflecting as far back as I can, my very first IT’S-IT probably was enjoyed when my parents owned and ran an Alta-Dena Dairy back in the late 70’s. The awesome thing about having a family store is sampling goodies for free whenever I felt like it. I wasn’t Augustus Gloop or anything, but I did try a few things.

I remember seeing the classic IT’S-IT packaging and felt right away that this ice cream was special. There was most definitely a sense of nostalgia associated with the wrapper, from the old-style typeface and child-like illustration. Although I wasn’t close to being born back in 1928, when George Whitney created the frozen confection and sold them exclusively at San Francisco’s old Playland-at-the-Beach, IT’S-IT felt familiar, like an old pal. 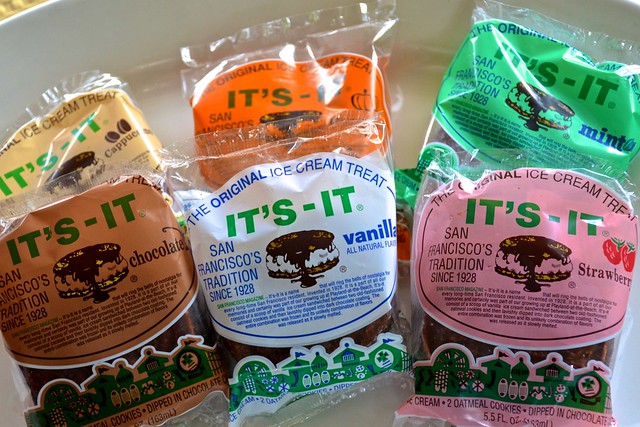 Vanilla is the original flavor. Today an array of tastes including chocolate, mint, strawberry, cappuccino, and even pumpkin are available to choose from. They’re all amazing.

IT’S-IT is also one of those regional treats like a MoonPie. Pretty much distributed by IT’S-IT only west of the Colorado Rocky Mountains (also Texas and New York), we can proudly claim this as our own. In fact, when I lived in San Francisco during the early ‘90s, I fondly recall driving along the 101 through Burlingame and seeing the IT’S-IT Ice Cream Sandwich factory off the freeway, and it always made me smile.

Many years have come and gone since the last time I tried an IT’S-IT, but finally today when I sank my teeth into the chocolate-covered ice cream sandwich, all those care-free, endless summer days obsessing about Star Wars came flooding back. Some things never change. IT’S-IT was IT and as good as I remember. Happy National Ice Cream Day!

Here’s a video tour of the IT’S-IT factory.