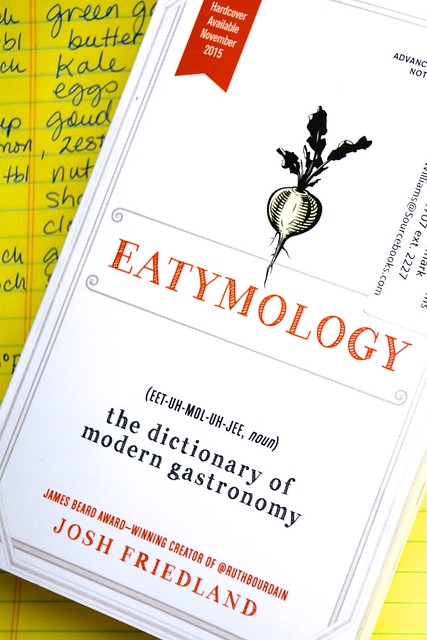 Just got this bad boy in the mail. EATYMOLOGY by Josh Friedland. Who's Josh Friedland? Maybe you know him better as Ruth Bourdain. Yes, Ruth Bourdain, the loco popular Twitter account that blended the voices of former Gourmet magazine editor Ruth Reichl and ex-kitchen punk rocker, current CNN Parts Unknown host Anthony Bourdain, into haiku-style tweets. Friedland's cross-polination of the two food celebs was so popular that the Twitter feed won a James Beard Award for humor in 2011. Ruth Bourdain also spawned a hilarious book called Comfort Me with Offal.

Now Friedland puts out a new book called EATYMOLOGY under his true identity. It's just as funny as his other tasty tome and useful too. If you've been looking to stretch your food lovin' lexicon, this is the manual for you.

After quickly flipping through a few pages, I recognized some lingo like "bone luge" aka "a method of drinking alcohol whereby spirits are poured down a length of hollowed-out roasted marrow bone into one's mouth." But terms like "felfie", "Goodfellas thin", and "smushie" were new to me.

Can't wait to finish it and, maybe, incorporate "raota" and "meatmare" into my rotation.