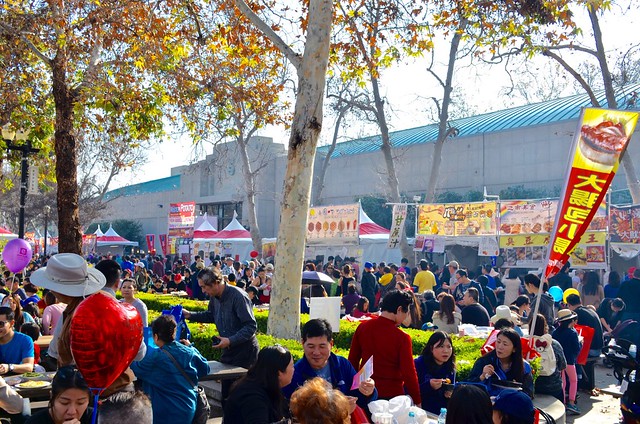 The Asian American Expo or AAE, now in its 35th year, is many things: It's a trade show offering electronics, travel, health products, automobiles and fashion. In recent years, AAE added a musical component by showcasing Asian pop stars from the U.S. and abroad. Anime Impulse was also folded into the mix and attracts rabid anime fans looking for their fix on the latest as well as classic artform based on Japanese animation.

The expo started up in 1982 with a mere 60 exhibitors. Now in its 35th year, AAE boasts over 1200 exhibitors promoting a dizzying variety of good and services along with 190 food hawkers ready to quell that conventioneering hunger.

Of course, I was just here for the grub! And there was much to grub. 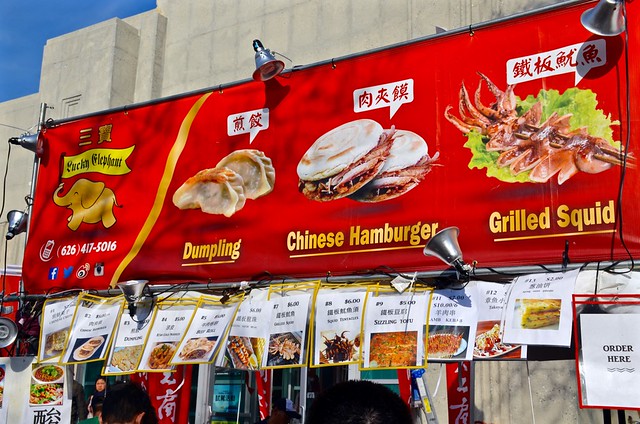 I'll gladly pay you Tuesday for a Chinese hamburger today.

The Lucky Elephant stall's cooks were slinging all kinds of food but what caught my eye were the Chinese crepes and hamburgers. The "hamburger" is better known as rou jia mo and is sandwiched by flatbread enclosing slow-cooked pork. 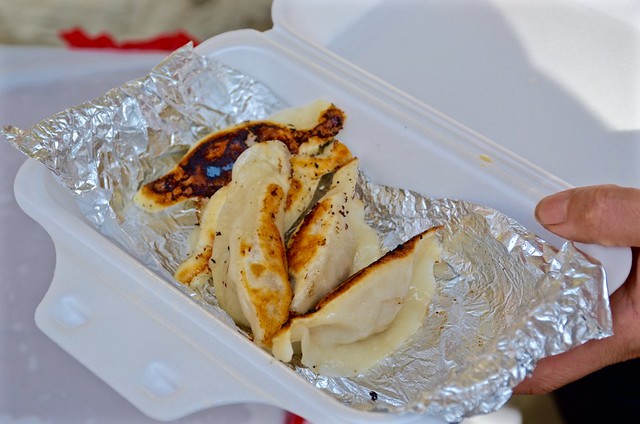 Dump-lin to my my belly!

Shandong Dumplings is a well-known San Gabriel Valley brand which recently expanded into Pasadena. Famous for their freshly sewn pork-filled packets, the pan-fried pork dumplings burst with well-seasoned savoriness and that all important juiciness. 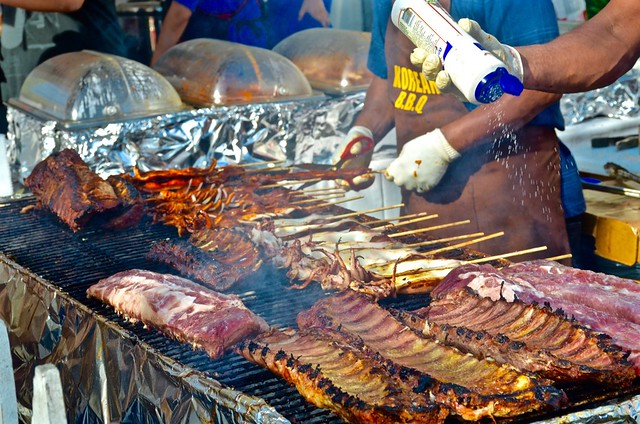 Carnage is the best way to describe the scene at Lucky Ball Korean BBQ. It was the kind of carnage a grilled meat loving carnivore would shed a tear over. A fantasy feast for the upcoming Superbowl. The rows of flesh from squid to chicken, pork and beef kept going and going. 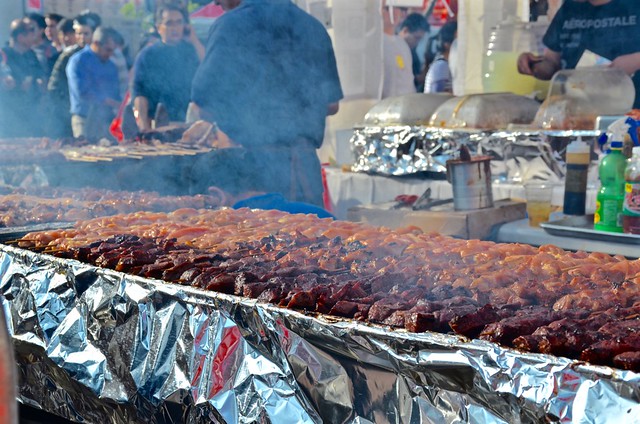 This colon clogging heap of a carne-val could've fed the entire population of meat-eaters at the expo. The aroma was seductive like only a good outdoor barbecue could be.

All the grills at the Lucky Ball stall were carefully draped with aluminum foil. My mother would've saluted these Lucky Ballers for their foresight. If you've ever seen Mom's kitchen you'd know what I'm saying. 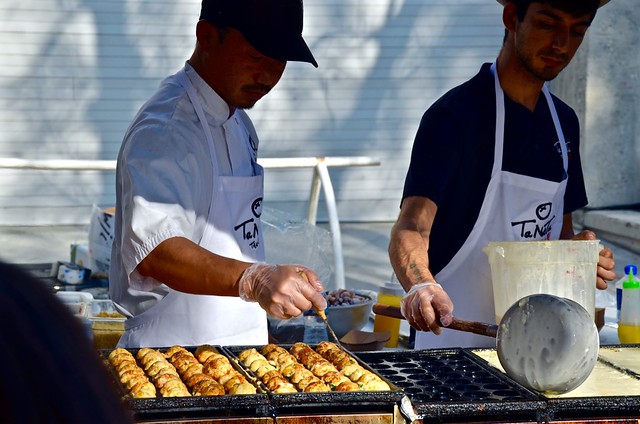 Takoyaki are spherical fried balls of wheat flour batter that's filled with octopus bits and other ingredients. The Tanota stand cooks were busy turning these tasty balls around the special takoyaki pans to evenly cook them. This was probably one of the best representations of Japanese cuisine as county fair food, if there ever was one. 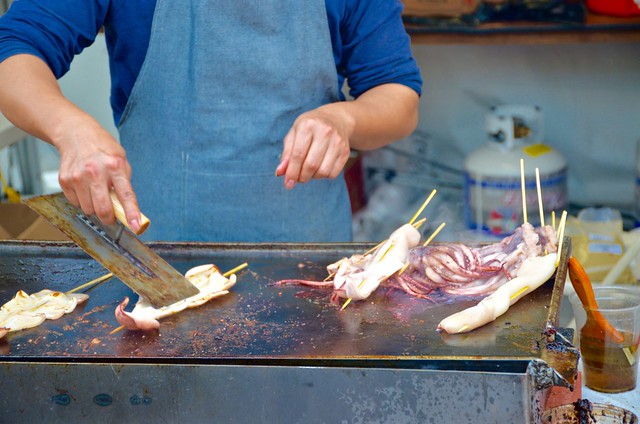 However, if you're a squid purist, then maybe you'd want to opt for the grilled squid. There was a lot of it. Frankly, I didn't realize my people loved them so much of the tentacly creature. Yes, calamari was represented. 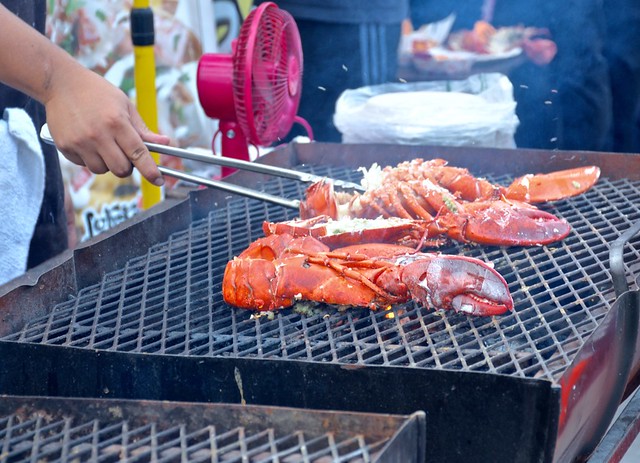 Whole grilled lobster for $15 was quite tempting. The Lobsterdamus booth kept super busy with that offer. Definitely a few notches above the usual street food options. A competing lobster booth offered lobsta chowda, which was quite tasty. 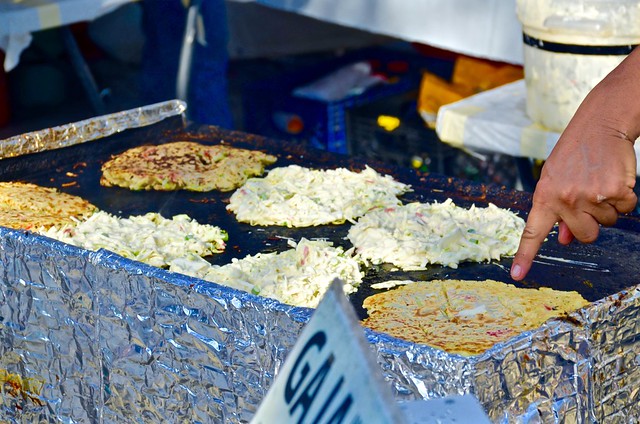 This popular Japanese "omelette" or "pizza" called okonomiyaki like the one griddled up at Gaja Okonomiyaki is famous for post-drinking noshing. It's essentially everything but the kitchen sink worked into a flour-egg batter then topped with a drizzling of mayo and a brown okonomiyaki sauce. There are all types of varieties. The style I usually like is topped with katsuobushi or bonito flakes. The feathery flakes groove to the rising heat like an invisible dance partner. 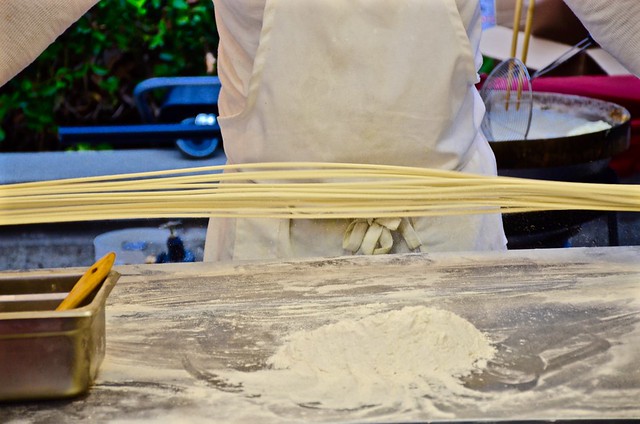 This guy's a noodle puller. He pulls his noodles all day long. That way they are supremely fresh. Fresh, like the guy writing these wisecracking words. But, seriously, the noodles at China Tasty Hand Pulled Noodles were freshly made right before my hungry eyes. 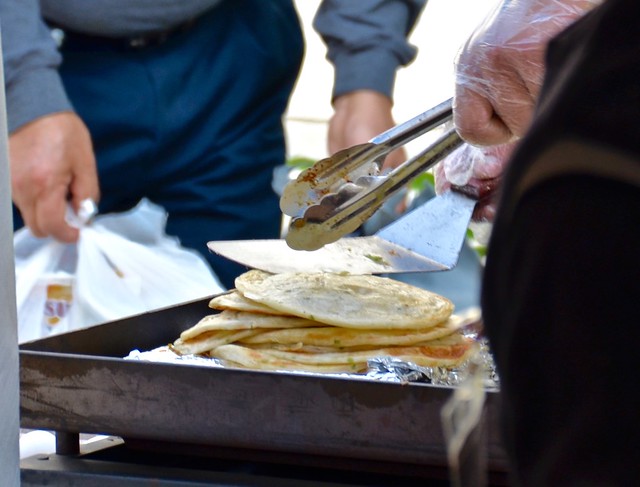 The stand making the scallion pancakes enjoyed a very long line. It's called 80's Flaky Scallion Pancake. I know the nostalgia thing is huge, but I didn't know the 80s were still that popular. Maybe because of Bowie. R.I.P. 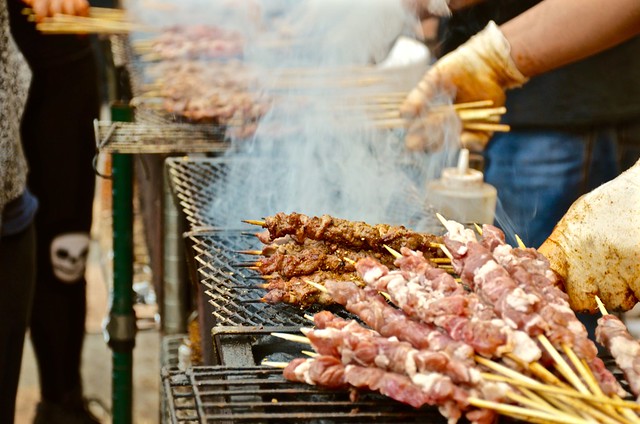 Covered with cumin and other exotic spices, the lamb kebabs at Shen Yang were irresistible. Considered Northeastern Chinese food, this meat-on-a-stick could warm anyone up on a frigid night. 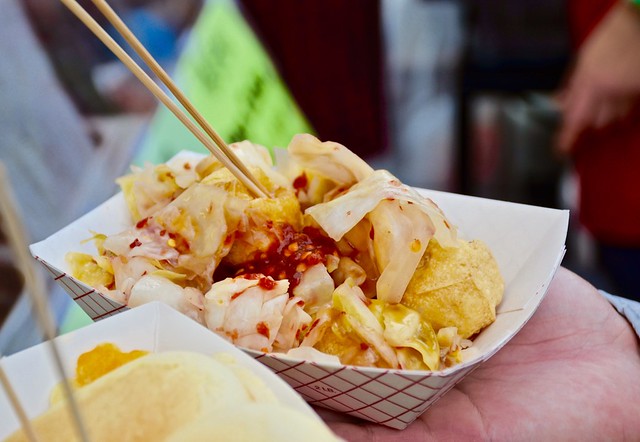 If you really want good stinky tofu, you don't seek it out. It calls to you. It leads you to it, by your nostrils. Far-reaching tendrils of reek work their way up your nose holes and hook onto helpless sinuses, then tow you to Lee's Taiwanese Cuisine where cubes of bean curd permanently enmeshed with marinated rot are served with cabbage, sambal, and a smile. The flavors were offensive but not obscene. Balance was the key. Enjoy! 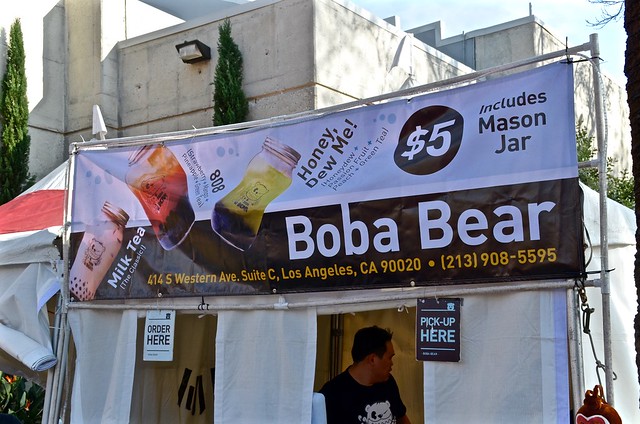 Need to rapidly remove the taste of stinky tofu from your mouth? Boba Bear is at your service.

Boba Bear isn't a long lost member of the Three Bears tribe, nor is he a bounty hunter from Star Wars. Boba Bear is a cute Koreatown boba shop that was really popular at the expo. Sadly, Boba Bear ran out of boba at the end of the day and was simply known as Bear. 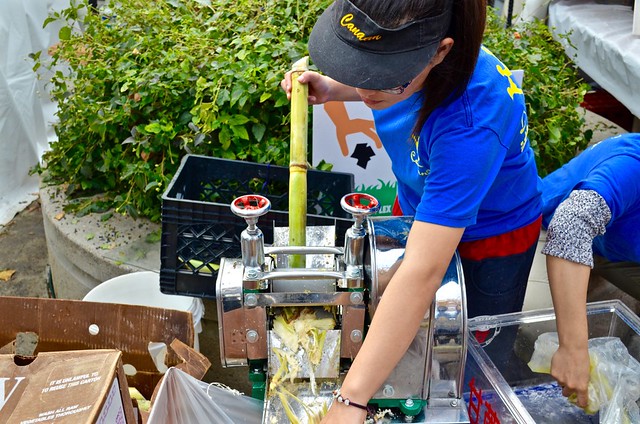 Freshly pressed sugar cane juice is one of those special things in life. So pure, so sweet, it makes the sugar crash worth it. And it brought me back to Taiwan where I last sipped on the stuff. 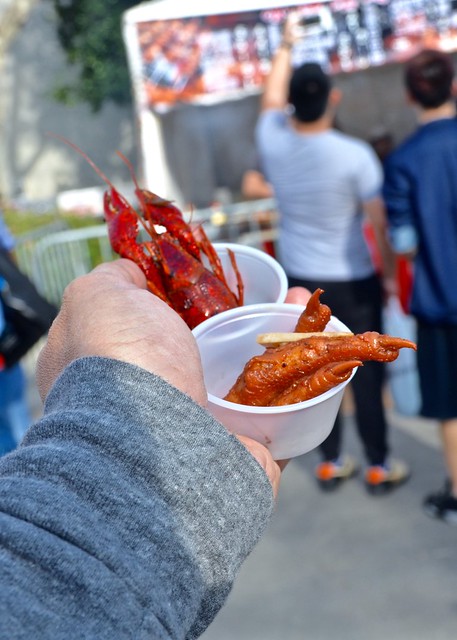 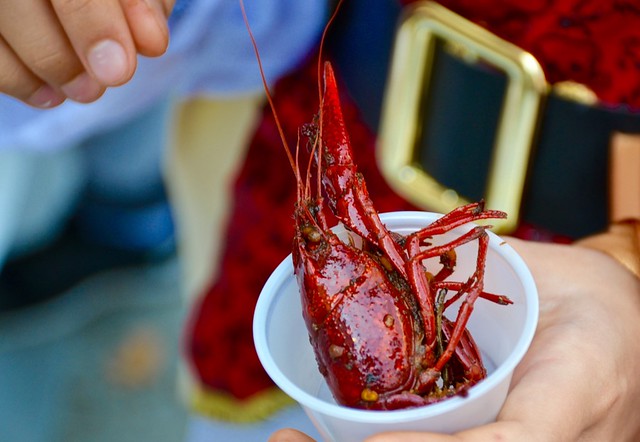 So generous was the LA Hot Duck booth that I pretty much made my own crawfish eating contest against myself right in front of their booth. They didn't seem to mind at all. 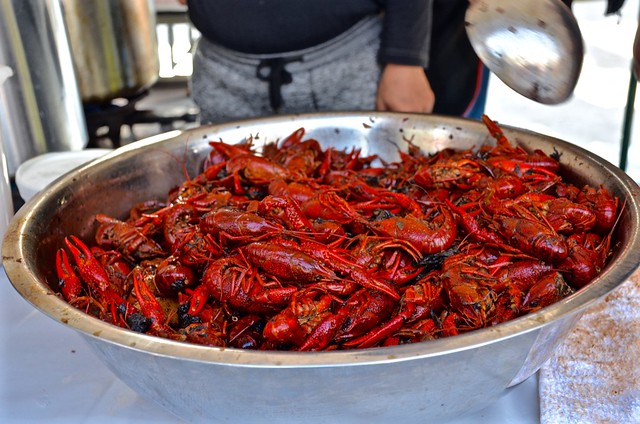 I ate so many the river called and asked for their crawfish back. LOL! 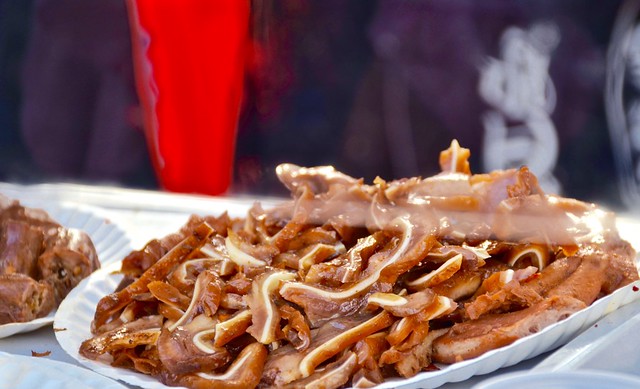 The pig ears were perfect at LA Hot Duck. Slippery, snappy, and just a tad spicy. Good thing the beer booth was nearby. 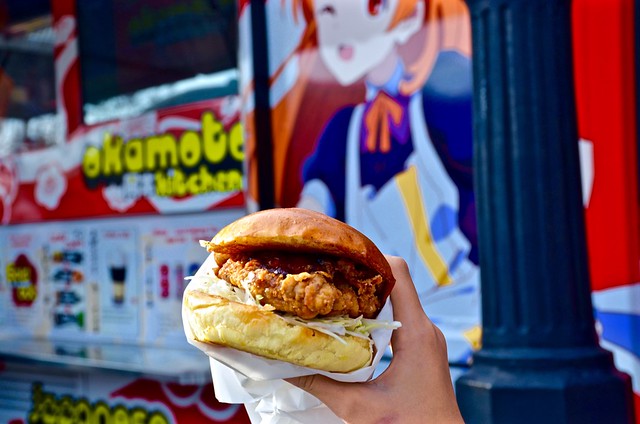 One of the coolest Asian food trucks on the open road right now is Okamoto Kitchen specializing in Japanese comfort food. I wrote a piece in the Los Angeles Times a couple of weeks ago about this mobile eatery. Some of Okamoto's specialty items include the Nom Bomb, a spicy, tartar-saucy deep fried chicken sammy. 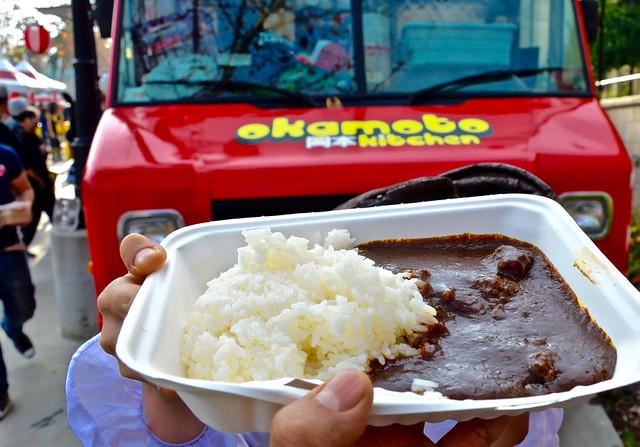 Japan was introduced to curry by Europeans via India. This OG-style of curry is called oufuu or European-style curry. It's less sweet in flavor and browner in color than your usual Japanese stuff. On the truck, it's named Okamoto curry and a truly unique curry experience in L.A. 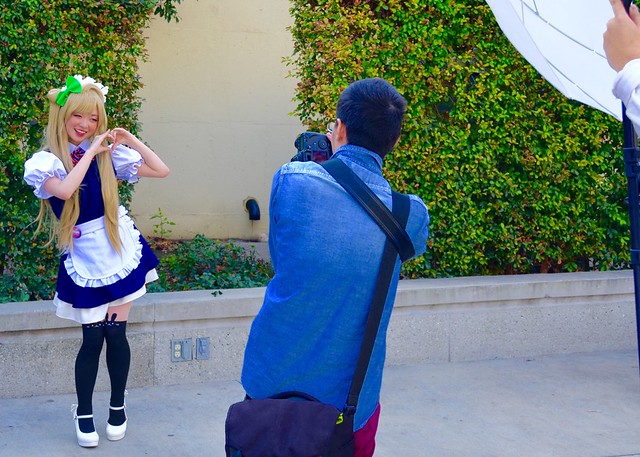 For dessert, how about some eye candy? Japanese maids pranced about the fairgrounds while promoting a maid cafe called Arcane. I, however, was already plenty sated. 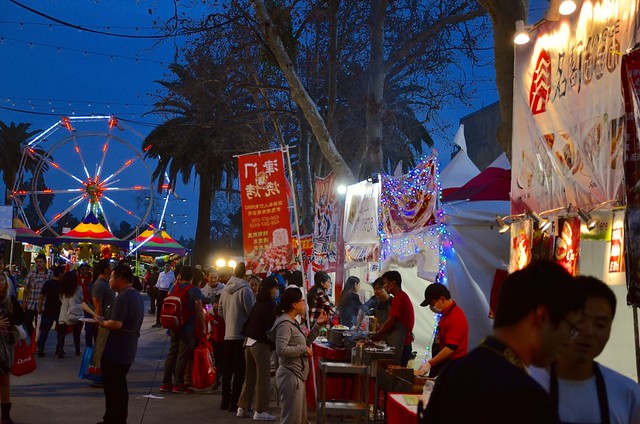 I love the night (market) life.

The eating went into the night until all the last, deeply discounted, fried tentacles were history and being digested. Taste you next year.