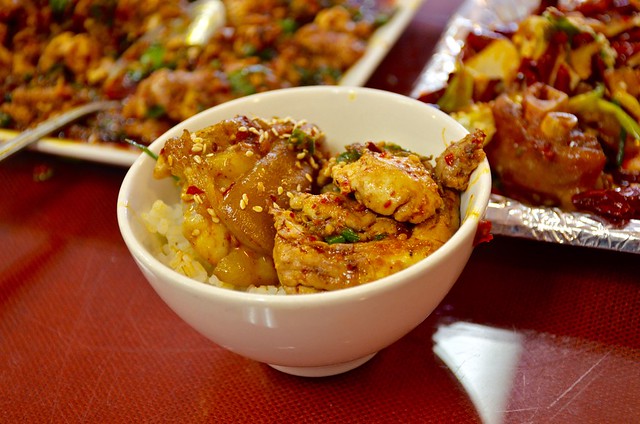 Head to toe in one bowl!

Restaurants sometimes drop the foodie phrase "nose to tail" dining to boast about using the whole animal while wasting none of it. Popularized by English chef Fergus Henderson of St. John restaurant fame, this offals movement in the pro kitchen holds varying degrees of integrity depending on the restaurant. Really, I've been to "nose to tail" restaurants that pretty much served fancy burgers, sausages, and pork belly plates with no items alluding to a Fergus Henderson recipe. (Granted, in those sausages could've been a nose, tail, and everything in between.)

Ask yourself, how many times you've seen actual nose or tail offered on a nose to tail menu. Not often, probably. Although it's quite possible to be gnawing on those bits if you're dining at Ben Ford's, Ori Menashe's, or Chris Cosentino's places in California. But then, maybe I shouldn't take nose to tail dining so literally, you say? Nah. True nose to tail is out there. You just need to sniff around for it.

But the truth is, nose to tail cuisine has existed for much longer than when the term was coined. In fact, I personally have been eating "nose to tail" style decades before it was a thing. As I have frequently shared in conversation and interviews, pig brains have been a part of my diet since I was six when my mother unfairly threatened further viewings of Speed Racer lest I finish my lunch of porcine gray matter. "No Speed Racer! Eat brain," she commanded. 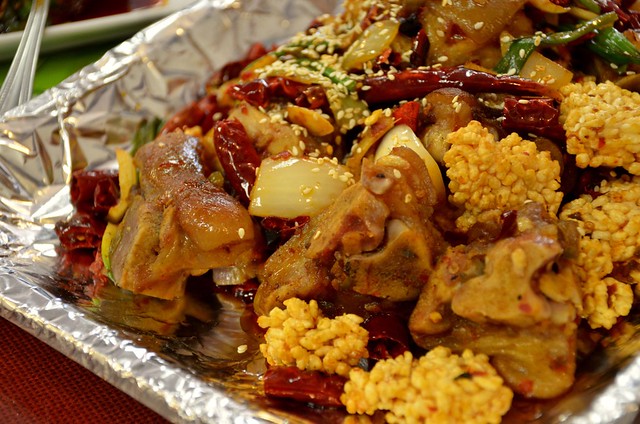 However, years later, I'm still listening to Mama and eating my brains, even though I've outgrown Speed Racer (thanks in part to the crappy Wachowski brothers' film adaptation). Of course, now I'm also eating a lot of other parts like the trotters.

Huolala in Monterey Park (the name literally translates to "fire spicy spicy") is one of many Sichuan-style restaurants that have sprouted in recent years, especially since the red hot Chengdu Taste reignited the genre in a big way. Although Huolala's food isn't as consistently good or expertly executed as Chengdu Taste or Szechuan Impression, I do like the weirder items on the menu like the pig feet, blood, and brains. You can practically get the whole hog here. It's what I like to call head to toe eating at its spiciest.

The pig feet at Huolala can be described as "hot to trot" because I want to insert a groan-worthy pun here, but, really, the trotters are pretty spicy. Not crazy spicy since you can still taste flavors outside of hot when eating it. The mala heat that emanates from the Sichuan peppers are known for its numbing effects on the tongue and mouth. The mala impact was there but mine was mild because I ordered it that way.

As far as the trotters, I've had much better. Although meaty, the ones at Huolala were too dry. All the flavors were there though. The crunchy, toasty rice cakes were fun and spicy too. 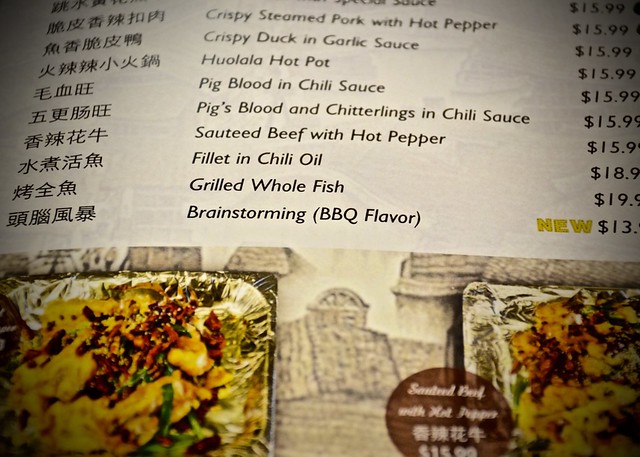 "We gotta come up with a name for the brain plate! Let's do some brainstorming on this one. C'mon, think!"

The pig brain on the Huolala menu is sort of hidden in plain sight. It's not called pig brain exactly but the word brain is in the title—this is menu euphemism at its most hilarious. If you're seeking spicy cerebrum, look for the selection named "brainstorming." On the menu, in traditional Chinese, it literally reads "brainstorm." Respect to the menu writer. I mean, what's a Chinese menu without some kind of wacky dish description? Just imagine the brainstorming session that took place to name the plate of brains "brainstorming." Makes my brain hurt, actually. 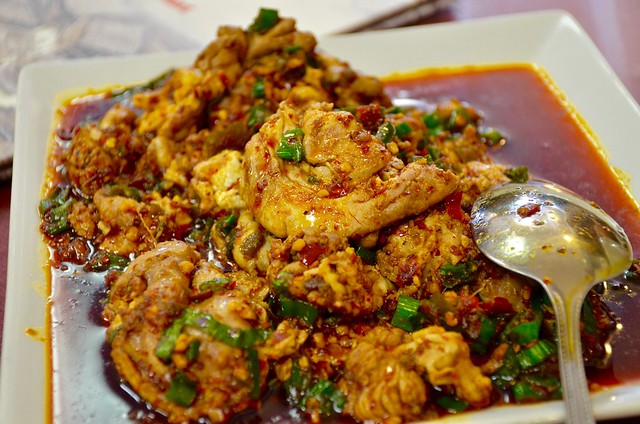 As much as the spicy trotters were okay, the brains were delicious. Steeped in a dark red sauce dotted with pepper seeds, the plate looks like a bloody crime scene but way tastier and without all the cumbersome police tape to cross. Brain lobes resemble misshapen tofu and even tastes like it but with a hint of animal protein and fattiness. A good percentage of the brain is made up of cholesterol, so that explains the creaminess. A medium tofu plus butter would be a pretty good description for pork brain's texture and flavor. On top of steamed rice, the spicy brain was right at home and blended in nicely. The odd parenthetical description "BBQ flavor" for the brain didn't make any sense; it's Sichuan spicy and not char siu or sha cha anything, although it'd be interesting if it was.

Put a bit of brain and a piece of trotter into a bowl of rice and you can legitimately claim you're eating head to toe and not posing nose to tail.