Year of the Monkey Celebration at WP24 with Chef Wolfgang Puck. All the Chinese New Year Greatest Food Hits up on the 24th Floor. Downtown Los Angeles. 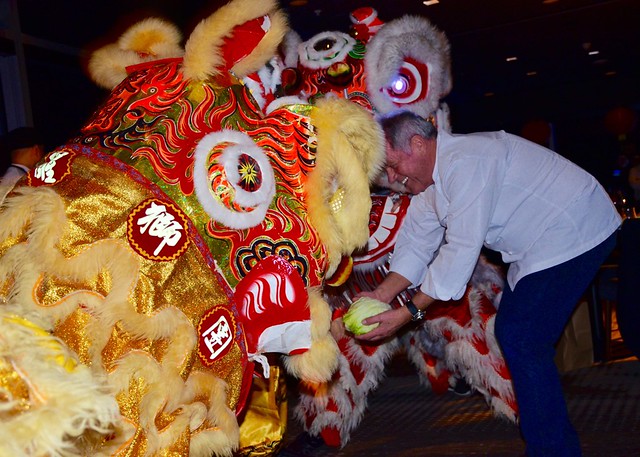 As the two week long Chinese New Year celebrations wind down all over the globe, we in Los Angeles, one of the largest Chinese populations in the U.S., saw a wide variety of festivities when it came to welcoming the Year of the Monkey in 2016.

In Chinatown, the traditional midnight spectacular of igniting half-a-million firecrackers by the Miss Chinatown Queen and her court at the Thien Hau Temple was sure to frighten off the intended targets of evil spirits along with anyone averse to being subjected to a barrage of loud explosives—this way of ringing in the new year will guarantee ringing in your ears. (Wow, I sound old.)

Massive displays of pyrotechnics welcoming the new year is perfectly fine once in a while, but sometimes a guy just wants to be pampered with fancy Chinese food and cocktails while hanging out with celeb chef Wolfgang Puck on the 24th floor of the swank Ritz-Carlton hotel at his restaurant WP24. 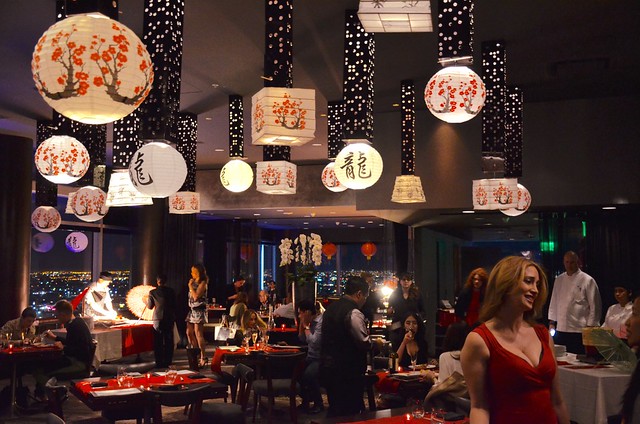 A festive room for the Year of the Monkey.

While I've dined at the Nest portion of WP24, an open dining room artfully resembling a bird's nest, located just beyond the main bar with a spectacular northern vista of Downtown L.A., I've never experienced the restaurant's proper dining room. WP24's Year of the Monkey celebration 3-courser and "Night Market" took place in this space, and it was as spectacular a dining room as I had imagined. 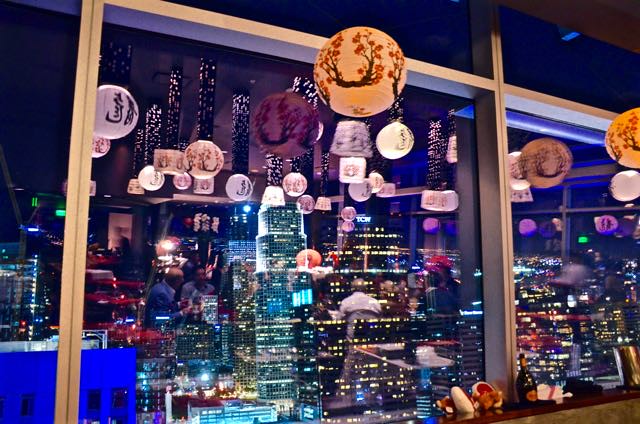 24 floors above the sprawl.

Delicate paper lanterns adorned fixtures throughout the dimly lit room with the downtown cityscape illuminating the space beyond the glass which encased WP24's chamber of chow. 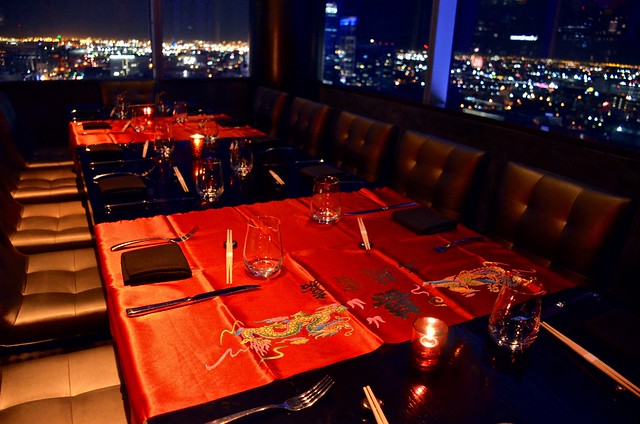 Every table was garbed in red, silken cloth embroidered with dragons and Chinese characters for good luck. Thus, the stage was appropriately set for the Year of the Monkey munching. 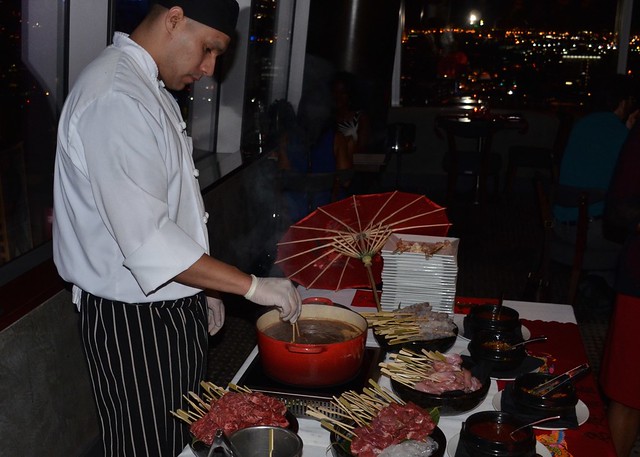 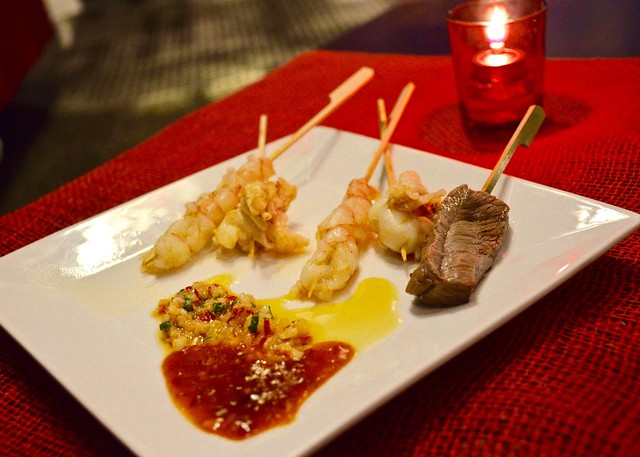 A slew of skewers.

The Szechuan hot pot skewer station was easily the busiest and most popular of the stations. Beef, lamb, chicken, prawn, and lobster selections were offered along with a sauce bar. The lobster, though, was the best of the choices. Fresh and firm, it was an irresistible bite. The sauce was almost overkill. 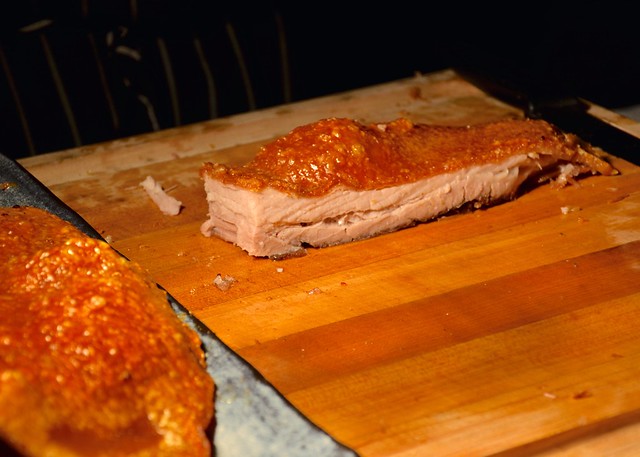 Whenever I read the description "shatteringly crisp," I imagine perfectly roasted Chinese pork skin like the one accompanying the succulent pork meat for the Year of the Monkey dinner. This yin and yang balance of juicy and crunchy is what the dish is all about. 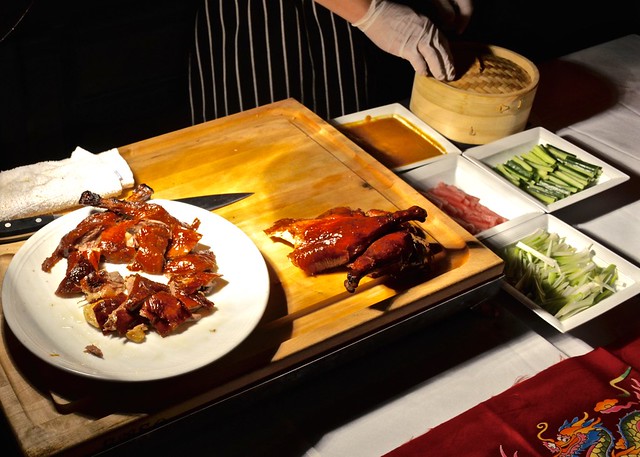 What's Chinese new year without duck? It's not, that's what. Unless you're a complete quack.

WP24's Night Market rolled out extra special Peking duckling, which I guess is the duck version of suckling pig. The duck didn't look small but, likely, not full grown either. The flavors, however, were big. 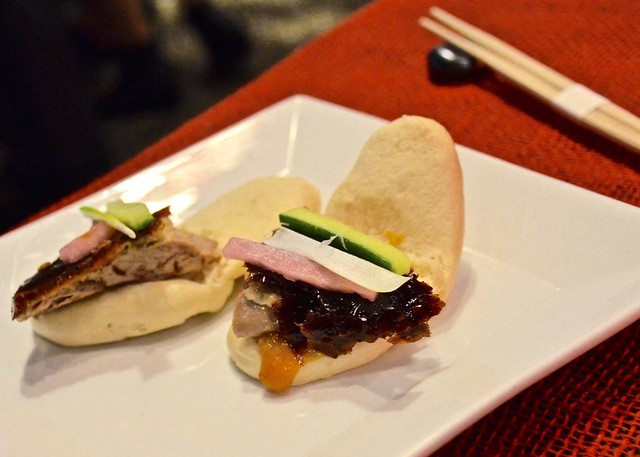 Bow down to duck bao.

Envelopes of fluffy bao were filled with crispy and tender servings of Peking duckling. This classic dish was expertly presented and plated, providing a perfect bite of traditional Chinese duck. 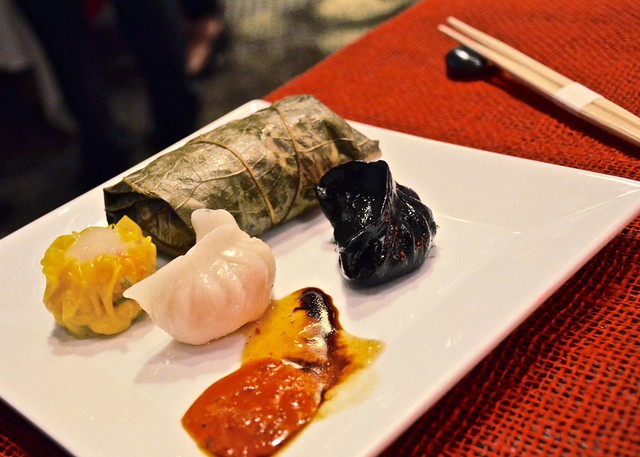 The delights of dim sum.

Who doesn't love dim sum and, even better, at night. The siu mai, har gow, squid ink Jidori chicken dumpling, and sticky rice filled with Alaskan king crab and sweet Chinese sausage were filled beyond the brim and did not disappoint. 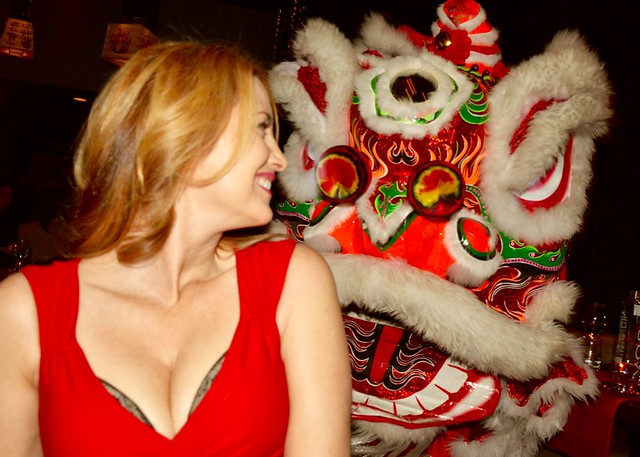 Do feed the lions.

Between the Night Market starters and the actual dinner came the lion dance interlude. Weaving in and out of the tables, the lions flapped their mouths at diners hoping for a generous donation or maybe a bite of shrimp dumpling. 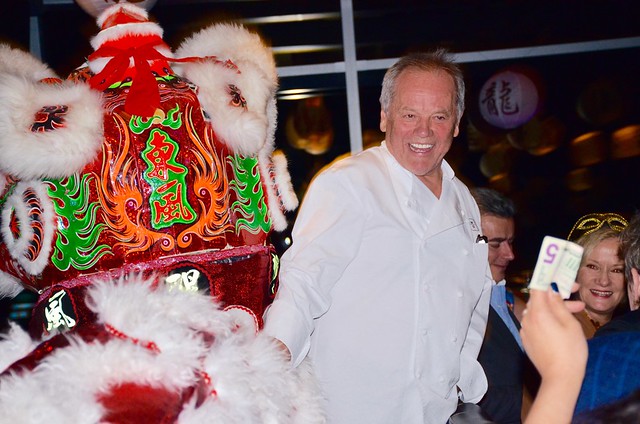 Lion dancing is an absolute requirement for any respectable Chinese new year celebration. Imagine Christmas without Santa and his reindeer. Impossible, right? Same thing with Chinese new year—the lions, the drums, the supporting characters, all make up the players in the theater of Chinese new year.

But at WP24, Wolfgang Puck himself was present to ensure that good fortune would be around for 2016 as he appeased the lions by feeding them oranges and lettuce as per tradition. 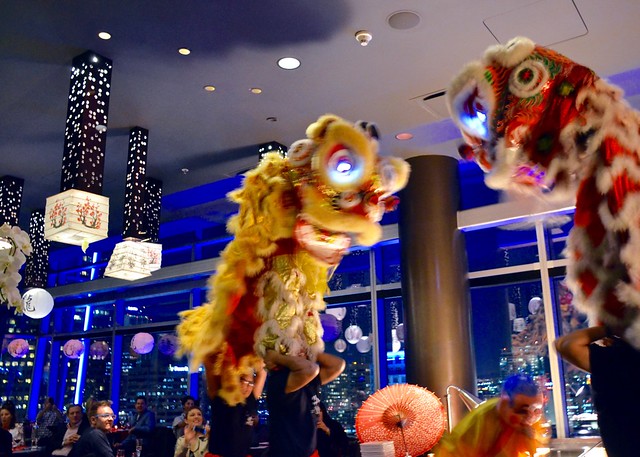 The lions seemed pleased by Puck's handouts. After some impressive acrobatic feats, the lions took their final red envelopes and bows. 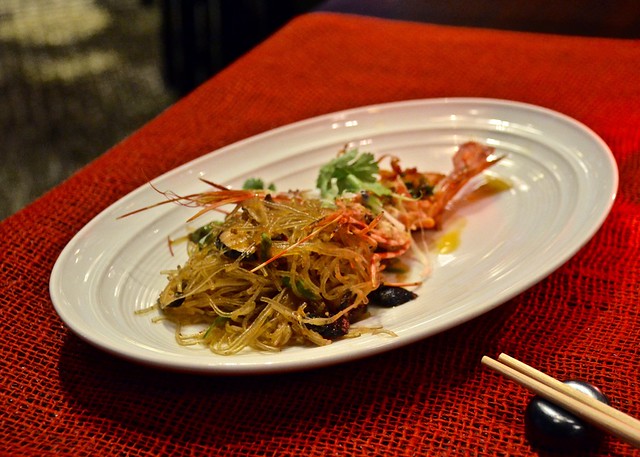 After the lions rhythmically departed, it was back to dinner.

Noodles are always the call for CNY. The superstition is that you don't cut noodles during the new year. Ever. Noodles symbolize longevity, so the longer your noodle, the better. For my first course, I opted for the Whole Santa Barbara Spot Prawns with XO Glass Noodles. 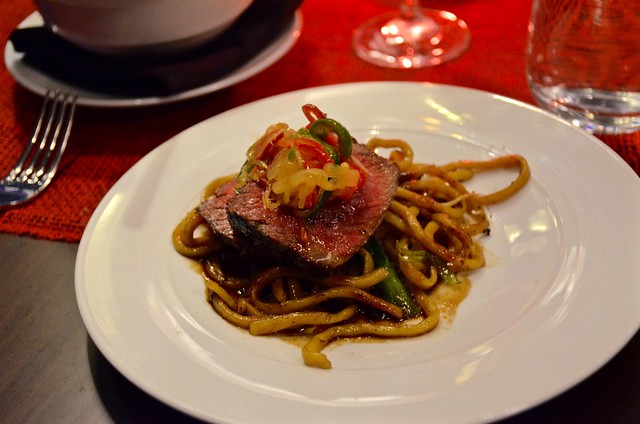 For the second course, I got more noodles. Remember the longevity thing? Yeah, it was pounded into my skull by dear, old Mama. This course featured Szechuan Peppercorn Crusted American Wagyu Rib Eye atop Oxtail Shanghai Noodles. These two plates should make the longevity gods more than happy. My compliments to WP24's chef de cuisine John Lechleidner who kept the menu true to tradition while staying inventive, all while Wolfgang Puck worked the lions as well as the room. 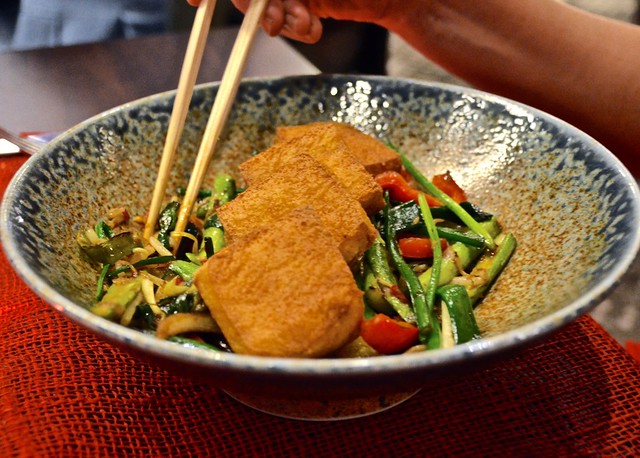 Even the veggie goddess was pleased with her fried tofu and vegetable stir-fry plate. Right, Sensual Foodie? 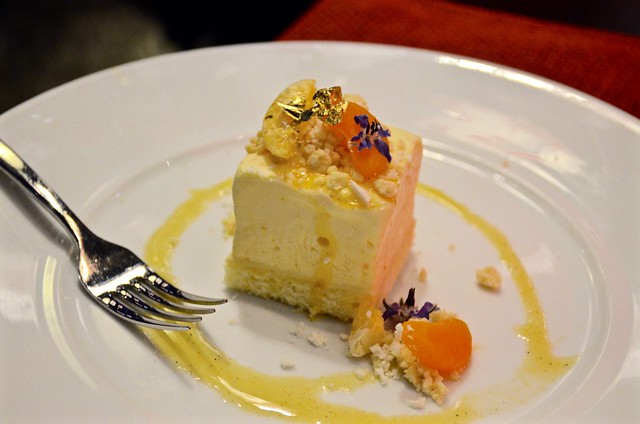 Sure, it's desirable to have a long life with lots of good fortune but if it's not sweet then what's the point? This is when dessert comes in. The Tangerine Creamsicle was more like a dreamsicle. Incorporating the symbol of luck and wealth, this lightly sweet, ice cream treat made sure tangerines concluded a luxurious and lively night high above the din of downtown L.A. and any evil spirits lurking below. 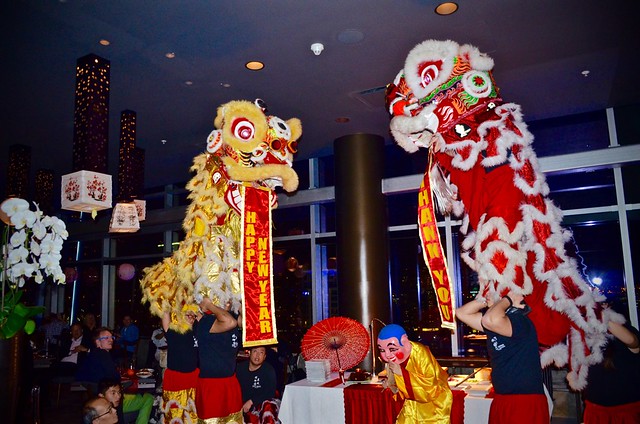 Happy Year of the Monkey, my monkeys!