Are You Ready For This Jelly? Ramen Jello is Coming to Town. 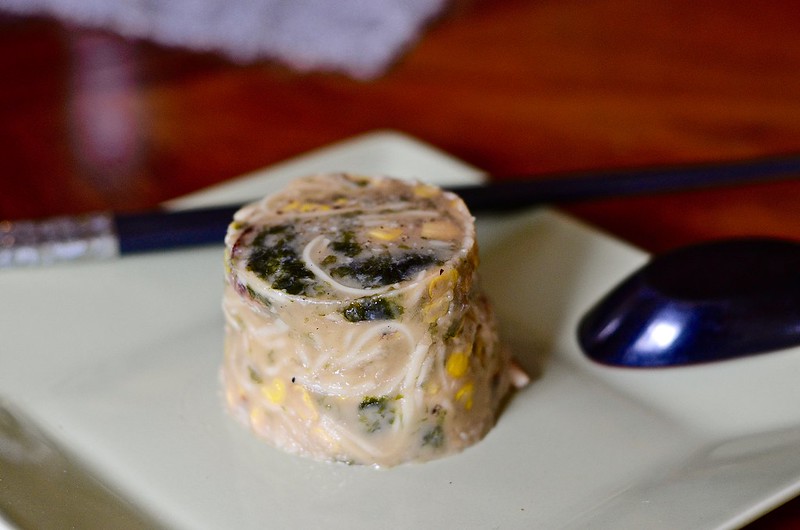 Ramen is ruler of noodle dishes all over L.A. People just can't seem to slurp up enough of it. New ramen shops open up every year specializing in one style or another. Although this relatively modern bowl of goodness remains pretty basic—broth, noodles, toppings—there hasn't been much innovation, unless you count the Ramen Burger. But, even the Ramen Burger was minimal with ramen-esque flavor. It was mostly the bun that made up the ramen concept.

Now steps in ramen jello. And it's exactly what it sounds like: ramen noodles, broth and toppings in gelatin form. The chef who thought of this jiggly ramen concoction is not really a chef, but he likes to call himself one. He's a (surprise, surprise) recent college grad from CSUN in the San Fernando Valley. His name is Randy Mann, but his friends call him Ramann. Get it?

He's been obsessed with ramen since his buddies gave him his nickname. Like most people, he discovered ramen in the Cup Noodles format, then moved on to packet ramen and, finally, enjoyed his first legit ramen experience at Daikokuya in Little Tokyo. He got a job as a dishwasher at a few ramen spots around the Valley near his university while studying chemistry. He wants to make ramen flavor packs for a living. "Ramen flavors have been stagnant. I want to step it up. There's so much to flavor your bland noodles with," said Mann.

Whenever Mann finishes a hefty bowl of ramen, he enjoys sweetening his palate with dessert but nothing rich. He prefers Jell-O. "Lime is my go to." Then one day he had a Reese's Peanut Butter Cup moment and wondered what it would be like to have ramen as Jell-O, so he busily went to work. Fortunately, he was armed with chemistry knowledge and figured out that tonkotsu aka pork bone broth congeals when cooled. So he cooked up some ramen from a recipe he lifted from one of his former employers and created the basic ramen. After a few failed attempts, he perfected his ramen jello. He laughs at the failures, "The form didn't hold. It was like ramen slime. So gross!"

He's been hawking Ramann Jello at pop-ups around campus events and underground food festivals where "basically nobody is licensed to prepare food." Apparently, the college crowd is into it. He's been selling out his 50 batch limit at every pop-up. "CSUN kids will eat anything. I'm happy for that." How far does he want to take Ramann Jello? "I'd love to have a stand at Smorgasburg. It's like a dream of mine."

Along with the tonkotsu broth and Mitsuwa-sourced noodles, Mann throws in corn kernels, thinly sliced braised pork belly and nori pieces—reminiscent of the famed savory Jell-O salads of Utah. And if you want to get technical about it, this dish is essentially a ramen aspic. There's a lot of flavor, and it gets really concentrated in gelatin form. It's tasty, an acquired kind of tasty but, hey, a taste nonetheless. Not sure if it will be the next big ramen thing though. Succeed or not, Mann is at least using his degree for something and also flexing his entrepreneurial muscles. Not bad for a recent grad. Rock on, Ramann!