Silence of the Lambs...Because I Ate Their Tongues. The Factory Kitchen @ DTLA, Arts District 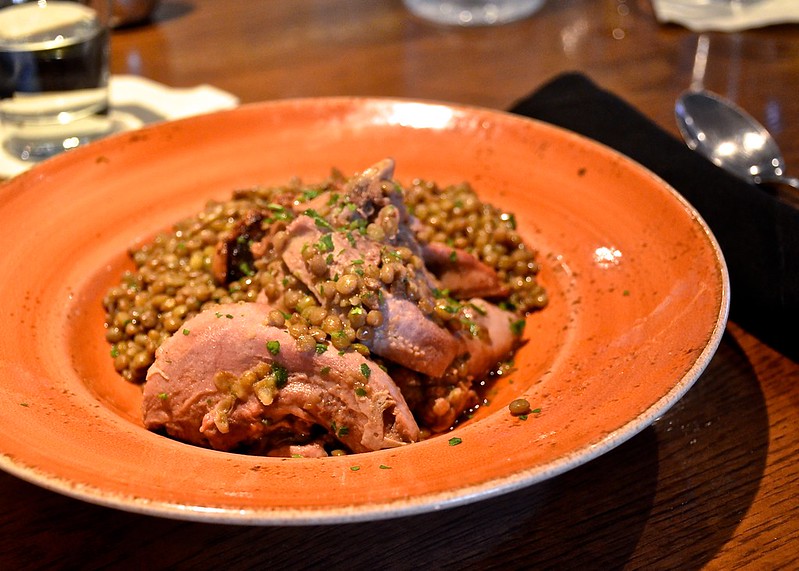 It's been a while or, as the kids say, a minute. I haven't been sitting idle, plucking lint out of my belly button though. Lots of things happening. I finally got a Deep End Dining Insta account like all the kids these days. (Not snapping on Snapchat yet however.) So do me a solid and head over to my Deep End Dining Instagram page and follow me! I'll probably be posting more there than here. Still be writing stuff here, just so you know. So check back now and then.

Although, you've probably seen me posting mainstream food on my blog, I normally try to pick the most interesting item on the menu to share with you all. But, if the restaurant is good and they don't happen to have anything all that unique, I'll still post the meal here because I think you might want to know.

So let's get into my latest meal which I'm quite excited about. It took place after I attended an event that I misinterpreted as a sit down, multi-course dinner, which turned out instead to be a casual gathering where guests stood around ravenously waiting for the chef and cooks to plate tiny, teensy bites of food. No booze either. After snapping up and wolfing down five diminutive servings, my friend and I debated on where to go after the "dinner party" to have a real dinner. Don't you hate when that happens?

Luckily we were in the fashionable Arts District of downtown Los Angeles where the restaurant scene is scorching hot. Among reputable eating places like Bestia and Church & State, there were many excellent options, especially for the stuff I like. We were walking distance to The Factory Kitchen, which I heard many good things about but never yet ventured into. So that was the call.

We got there before the rush and snagged two spots at the bar, ordered a couple of bourbons, and scoured the menu for interesting eats. What leapt off the page instantly was the piattograsso or plate of fat. What could be better? But, this entree wasn't to be taken in the literal sense, it was a described as "seared lamb tongue, traditional Modena’s pork sausage, Umbrian lentils, foie gras." Now if that doesn't sound like a party on a plate, then I don't know what kind of parties you go to, probably boring ones.

When the dish arrived, my dining partner was disappointed (he ordered the same). He had imagined a plate with each described item occupying its own area, instead the order was presented like a stew. Lamb tongues and cotechino di Modena piled on top of a bed of lentils with foie gras strewn throughout. It was very rustic, more comfort food than haute cuisine. He also was anticipating the seared lamb tongue to be crispy, at least slightly. It wasn't. The tender textures mostly blended together.

I, on the other hand, didn't mind the presentation at all. Everything was heavenly tender and, for a guy who just had many molars extracted aka yanked out, I was delighted. The feel of the tongue (yeah, I said it) was that of pulled pork but softer. And there wasn't just one tongue, more like three per plate. You could even make out the taste buds. How's that for knowing where your food came from? And, yes, tongue is a food that tastes you back in a way. Best of all, the lamb tongue was very subtly gamy, just enough to know it's lamb you're eating. Perfect.

The loosely packed Modena sausage was savory and pleasing to the bite. The essences of the ingredients melded with the earthy lentils to satisfaction and more. One thing, though, I thought the foie was extraneous. Didn't lend much to the overall plate. Reads nice on the menu though, but as far as eating, it was outperformed by its plate mates: lamb tongue and cotechino. C'est la vie, foie gras.

Even though The Factory Kitchen is heralded for its outstanding fresh pasta, I always suspected its offals game was spot on, especially with its proximity to Bestia, the king of offals in L.A. My hunch was deliciously confirmed with the plattograsso, in particular the ideally prepared lamb tongues. Silencing lambs never tasted so good.